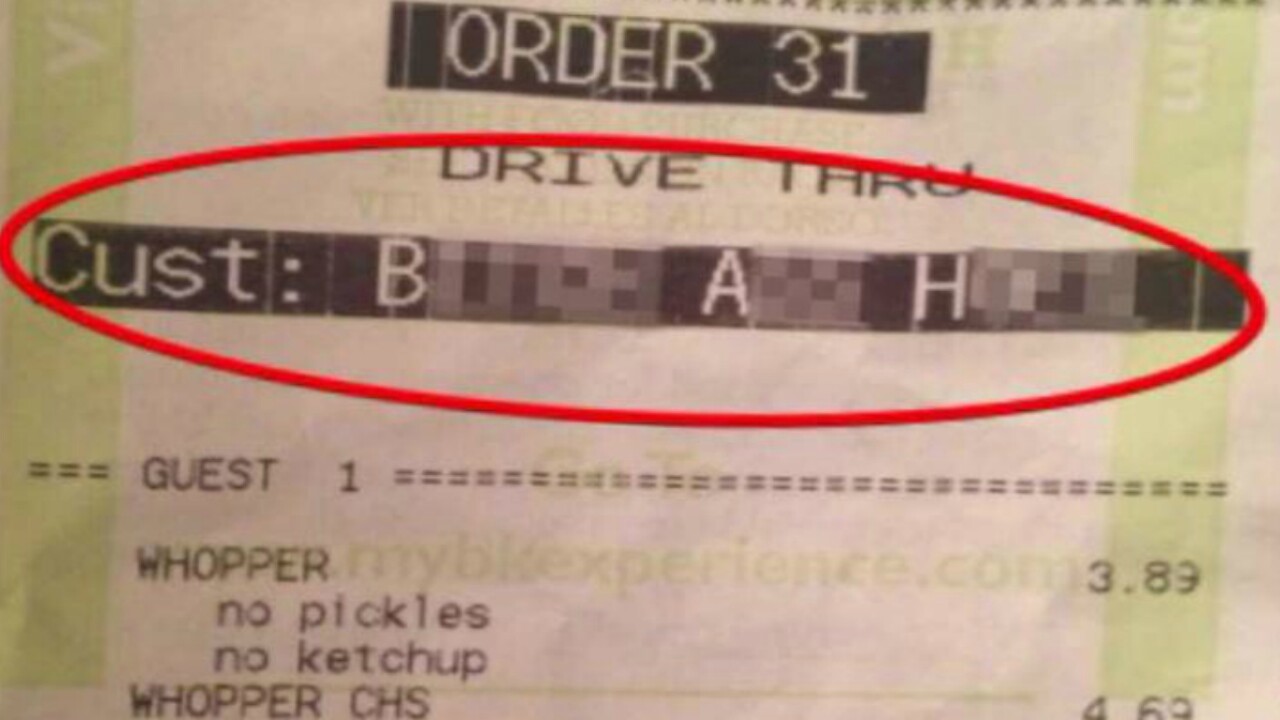 UPDATE: "The employee involved in this incident has been terminated," Burger King wrote in an email following up on the initial report. "Customer service is a top priority every day at BURGER KING® restaurants and we have great respect for all of our guests."

RICHMOND, Va. (WTVR) - A Richmond woman said she would never go back to Burger King after she was handed a receipt that labeled her and her daughter-in-law "B****A** H***."

"This is more than an insult. I mean calling you names on a piece of a paper, that will hurt somebody," Miss Lorel said while fighting back tears. "I liked going there. But after this they won't get my business anymore."

Miss Lorel, who did not want her last name made public, said she saw the profanity on the receipt Saturday night while she picked up her order at the drive thru of the Belt Boulevard restaurant. She immediately asked to see the manager.

"He did apologize. He also called the young lady over and asked her, ‘did you see this?’ She just shook her head. He said it had never happened before," Miss Lorel recalled.

“We are obviously upset by the harm this has caused one of our customers,” franchise owner John Naparlo said.

A Burger King district manager said he was "dealing with" the situation.

"At Burger King Corp. (BKC) we have great respect for all of our guests and customer service is a top priority every day at BURGER KING® restaurants. BKC has recently been made aware of a photo that shows an alleged receipt from a franchisee-owned and operated restaurant that does not comply with our customer service policy. We are working with the franchisee, who is investigating the matter, to determine the origins of this photo," BURGER KING® Media Relations wrote in an email to CBS 6.

Naparlo added he hoped video surveillance would help them figure out who was responsible for the profane receipt.

If you ever find yourself in a similar situation, CBS 6 legal expert Todd Stone said to speak up.

"Big companies like Burger King don’t want this stuff coming out publicly, so there might be an incentive there for them to settle something with her," Stone said.