Lawyer: Doctor had .11 BAC on way to work when he fatally hit Hanover runner 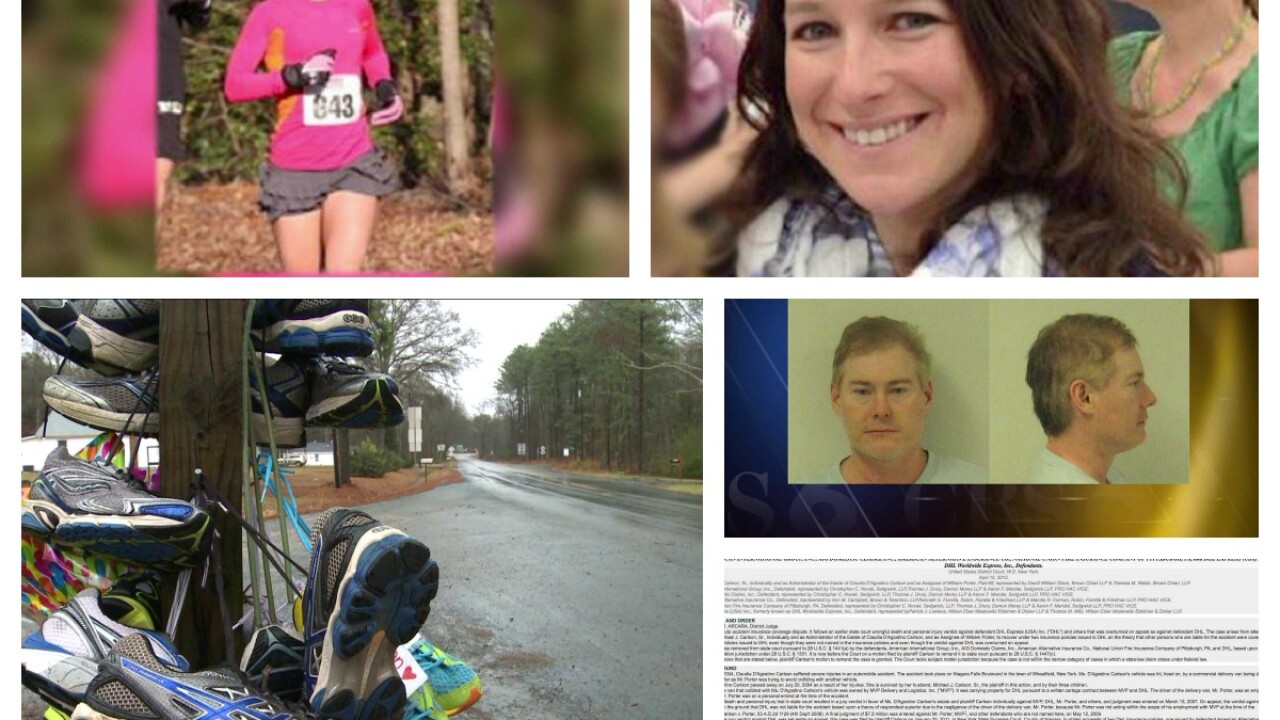 HANOVER COUNTRY, Va. (WTVR)--Details are emerging in the fatal accident involving a Bon Secours doctor who police said was driving under the influence when he struck and killed a well-known Hanover mother on her morning run.

In addition to these items, Carlson's iPhone 4 was seized.

Carlson’s blood alcohol content was .11  at the time of the crash, a member of his legal representation confirmed. The legal limit is .08.

Around 8:15 a.m., Carlson was traveling westbound on E. Patrick Henry Road to his job as an internist at Theresa Thomas Medical Center when he struck Meg Menzies, 34, as she ran east on the westbound shoulder, according to police.

Hundreds have responded to a Facebook invitation to run in honor of Meg Menzies.

Carlson stopped at the scene, called 911 and attempted to help Menzies, his lawyer Gregory Sheldon said in court. She was transported by Hanover Fire-EMS to VCU Medical Center where she later died as a result of her injuries.

The responding officer said that Carlson reached down to adjust the radio and ran off the road. He told the officer that he saw a runner but was unable to avoid the individual.

The officer said he smelled alcohol on Carlson, whose speech he said was slurred. The officers also said that Carlson's eyes were red and he seemed "unsteady" on his feet. Carlson told the officer that he drank until around 10 p.m. but not since.

Carlson’s lawyers argued during a bond hearing Tuesday morning that the doctor, who appeared via video feed, was not a flight risk due to his strong community ties and current health situation.

Carlson was diagnosed with leukemia in 2006 and currently undergoes chemotherapy, according to his lawyers. He has custody of his three children and cares for his fiancee’s two children.

Carlson’s lawyer argued the doctor had no history of substance abuse, nor prior criminal history. He was granted a $25,000 dollar bond Tuesday.

Under the judge’s order, Carlson is not allowed to drink alcohol and must wear a SCRAM bracelet, which lets the court know if a person has been drinking alcohol.

Carlson, a New York native who moved to central Virginia 15 year ago, lost his own wife to an automobile accident 10 years ago.

In 2004, he was visiting relatives in New York with his wife Claudia, who was a licensed accountant in Richmond. She was out alone on a shopping trip for her daughter when a commercial delivery van hit her vehicle head-on.

Thirteen days later she passed away as a result of her injuries.

The driver of the delivery company MVP was on a personal errand at the time of the accident. He testified, according to reports,  that he was trying to avoid an accident with another vehicle.

In 2006, Carlson won a $20 million wrongful death lawsuit in New York, considered at the time to be one of the largest settlements in the region.

During the 2006 trial, one of the attorneys who represented the Carlson family in the case told the Buffalo paper, “In all my 30 years of trying personal injury cases, I have never met a more decent family who has suffered to this extent.”

A classmate of two of Carlson’s children at Hanover High School, who did not want to be identified, told CBS 6 that the kids left school early on Monday and did not come to school Tuesday.

Carlson will return to court on April 2.

Flowers and running shoes mark the roadside memorial for Menzies, who had strong ties to the running community.

By Tuesday night more than 27,000 people have responded to a Facebook invitation to run Saturday in honor of Meg Menzies.

“As an avid runner, member of the Richmond Road Runners Club, and Boston marathoner, she was a member of the running family nationwide. In her honor, our hope is to raise awareness of drunk driving, texting and driving, and overall safety of runners and cyclists everywhere,” a message on the Meg’s MilesFacebook page read.

Menzies was also a mother of three and married to Ashland Police Department Sergeant Scott Menzies.

“Meg has equally been a part of our law enforcement family for nearly a decade and her presence in our midst, and especially that of her family, will be sorely missed,” Ashland Police Chief Doug Goodman wrote in a statement.

“With her support, Sergeant Menzies has been a steadfast catalyst for improving safety in our community. Whether working late on DUI enforcement patrols or coming in on his day off to lead a public education program focusing on the dangers of drunk driving, Sgt. Menzies always had her unyielding support. To lose his wife in this manner is simply unfathomable.”