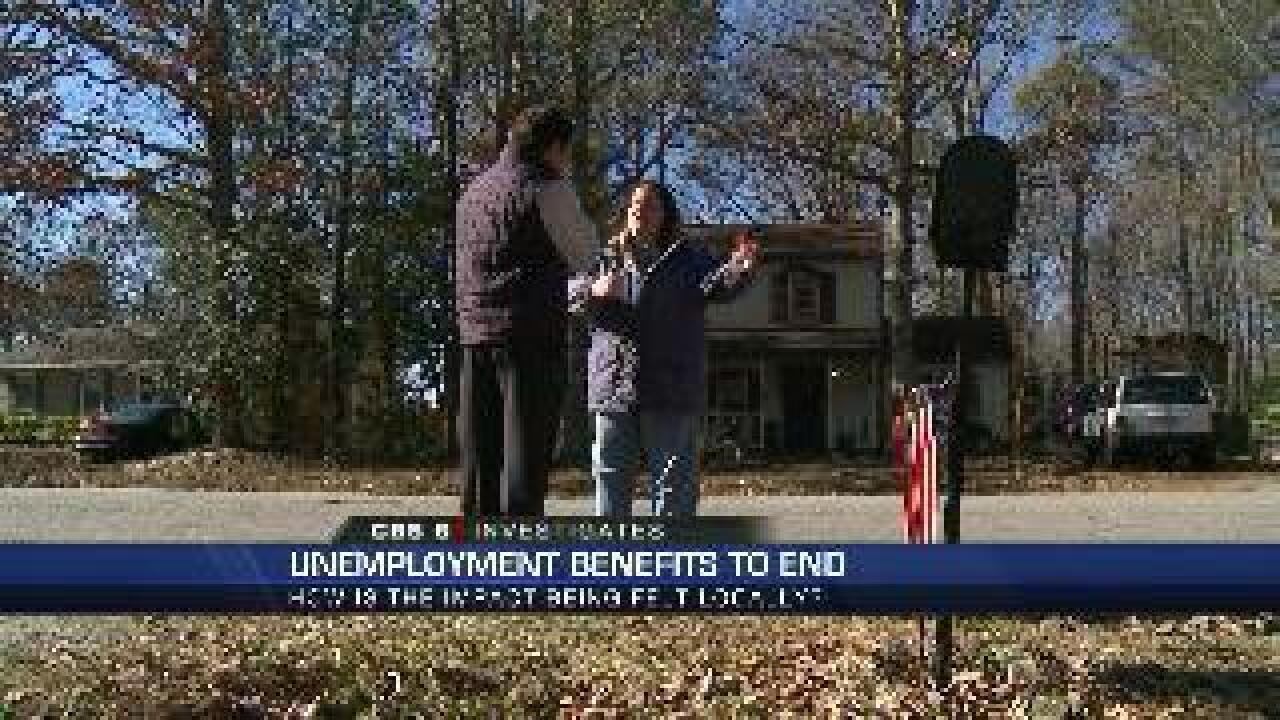 NEW YORK (CNNMoney) -- Michelle Marshall is one of the 1.3 million long-term unemployed Americans who will lose jobless benefits Saturday.

Marshall, 56, has been out of work for a year, since she lost an administrative assistant job that paid her $44,000 per year.

She started collecting $624 each week in New Jersey unemployment benefits, but the state benefits ran out after 26 weeks. When federal benefits kicked in, she collected $521.

But Marshall will stop getting these checks next week.

That's because Congress failed to extend the recession-era program when it passed a budget deal last week.

Federal benefits kick in after state benefits run out, and range between 14 to 47 weeks, depending on the state where a person lives.

According to government figures, the average weekly benefit check is $300.

Even the cut from the larger state check to the federal benefits was hard for Marshall. She had to consolidate her $12,000 worth of credit card debt and enroll in a mortgage assistance program.

When the benefits stop entirely, she doesn't know what she'll do.

"I imagine I will go apply for food stamps," she said. "Depending how long this goes on, I might lose my car, which will impact my ability to get a job. I won't be able to drive to interviews."

The program was first signed into law in June 2008 by President George W. Bush, when the unemployment rate was 5.6% and the average duration of jobless insurance was 17.1 weeks.

The unemployment rate climbed to more than 10% at the height of the Great Recession in 2009, and the government extended the federal benefits for the long-term unemployed.

However, thanks to a weak recovery, those benefits have been either extended or expanded 11 times, most recently on Jan. 2 .

Most states, however, have cut back unemployment benefits, as the labor market has improved.

During negotiations over the budget deal earlier this month, House Speaker John Boehner suggested he was open to an extension if the White House came up with a plan. But the provision didn't make it into the deal that President Obama signed last week.

The White House issued a statement on Friday saying senators have put forward bipartisan legislation to extend emergency unemployment insurance for three months, and Senate Majority Leader Harry Reid will bring it to vote as soon as they are back from recess.

The Obama administration has said the end of extended benefits can have a major impact on the economy.

The White House Council of Economic Advisers and Department of Labor issued a joint report earlier this month touting how jobless benefits buoy the economy, while keeping 2.5 million workers out of poverty each year.

The White House pointed out in a separate report that the expiration of benefits could reduce U.S. GDP by 0.2 to 0.4 percentage point in 2014, according to the Congressional Budget Office and a J.P. Morgan Chase economist.

The Congressional Budget Office said the cost to extend the federal benefits by another year is about $26 billion.

But Republicans have said in memos that the program has already cost $252 billion in the five years through July.

Democrats intend to make this a big issue. House Minority Leader Nancy Pelosi said Friday that the first item on Congress' agenda in 2014 must be an extension of unemployment insurance, and Senator Reid said last week he would push for an extension "after the new year." Ads by a liberal group blasting the Republicans for inaction are running this week on cable TV networks, including CNN.

Those who are set to lose benefits, like Marshall, haven't lost hope, but they are urging Congress to do something.

"Give us a little more time to try and make some plans," she said. "I can't give up. I have no one to take care of me."