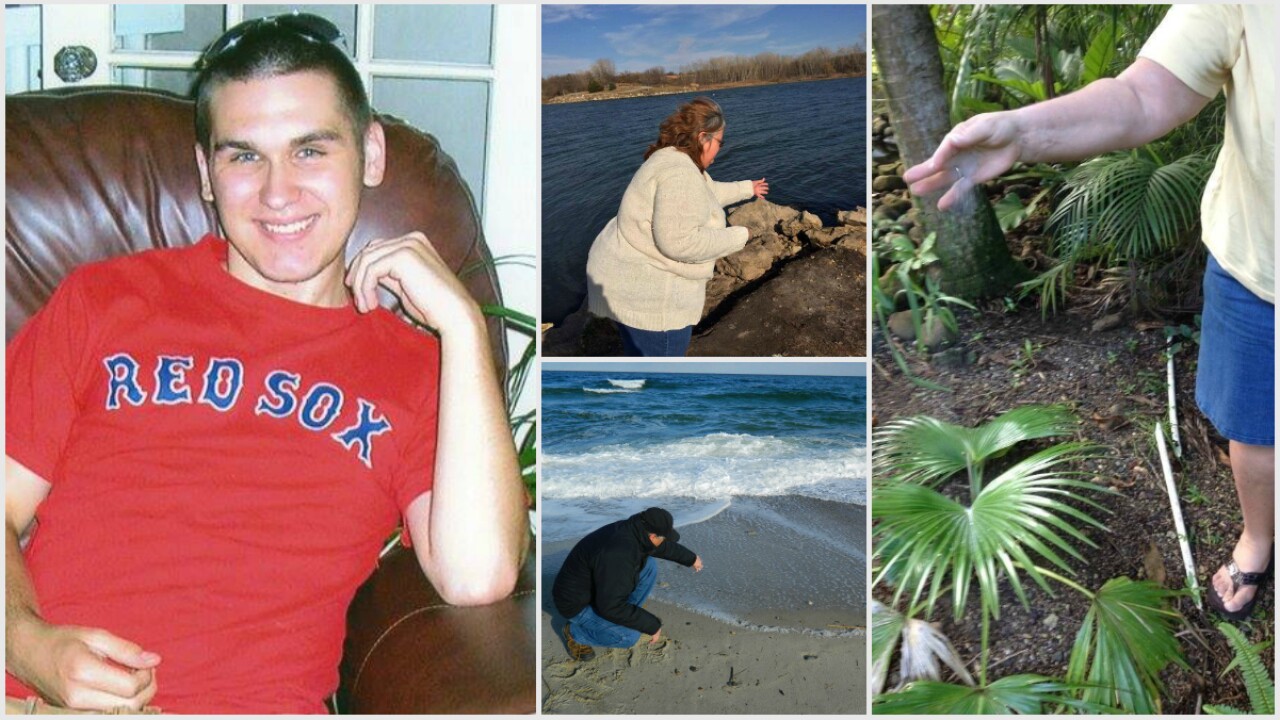 (CNN) — For more than three years, Hallie Twomey has struggled with the suicide of her 20-year-old son, C.J. She searched his belongings for a note with a clue of what tormented him. She sought counseling and attended support groups. Nothing helped, she said.

Now, a plea initially to Facebook friends throughout the United States to help C.J. “see the mountains that he never got to climb, see the vast oceans that he would have loved, see tropical beaches and lands far and away” by scattering his ashes has turned into an international effort. Strangers from India to Jamaica are spreading his ashes in tribute to the adventurous young man. A separate Facebook page called “Scattering CJ” has more than 4,000 likes.

“How do you say thank you for that?” Twomey asked in an interview with CNN. “It’s been so much and so amazing but I’d give it all back if I could have C.J. It doesn’t go past me that it’s Christmas, and holidays are so hard for us. I just wish I had him and none of this.”

Still, the outpouring of support since her “Scattering CJ” page went up November 11 has been a source of comfort. On Facebook, the pictures and videos chronicle the places: From the Grand Canyon to the Caribbean, from Australia to Morocco, C.J.’s ashes have been spread.

“Quite frankly, I spent the first two weeks doing nothing but crying,” Twomey, of Auburn, Maine, said. “I just wasn’t prepared for what people were sharing and how somebody who has absolutely no connection to me could be affected.”

Along with the ashes, Twomey sends a note and a small photo of C.J. in a Boston Red Sox T-shirt. His ashes have even been scattered at Fenway Park, home of his favorite team. His mother asks the recipient to think about her son and the people he helped through organ donation. She also asks that in their thoughts, they remind him that “Mom and Dad love him, and that Mom is sorry.”

Many of those scattering the ashes have also been affected by suicide or have outlived their children, she said.

“I’m so touched,” she said. “I’ve lost all faith in pretty much anything since C.J. died. I don’t pray anymore. I’m just not spiritual. I think this was such an effort for me to put my faith — not to be dramatic — in mankind. That’s been wonderful.”

For three and half years, Twomey said, she has regretted the argument she had with her son moments before he stormed out of their home and shot himself in his car.

“C.J. and I fought terribly literally two seconds before he put a gun to his head and my last words to him were not nice,” she said. “I didn’t tell him I loved him. I didn’t hug him.”

Twomey said C.J. had been upset about not making an Air Force special forces team. After being honorably discharged, he returned home.

“He seemed OK,” she said. “I didn’t see any major life changes or severe depression.”

More than 150 packets, each containing a small portion of ashes, have gone out so far, with 300 other people offering to extend C.J.’s journey. She has spent nearly $600 on postage, Twomey said.

“My biggest fear was that C.J. would be forgotten and every time somebody writes a comment or offers to take him on this journey, he’s being thought of,” she said. “That’s so powerful.”