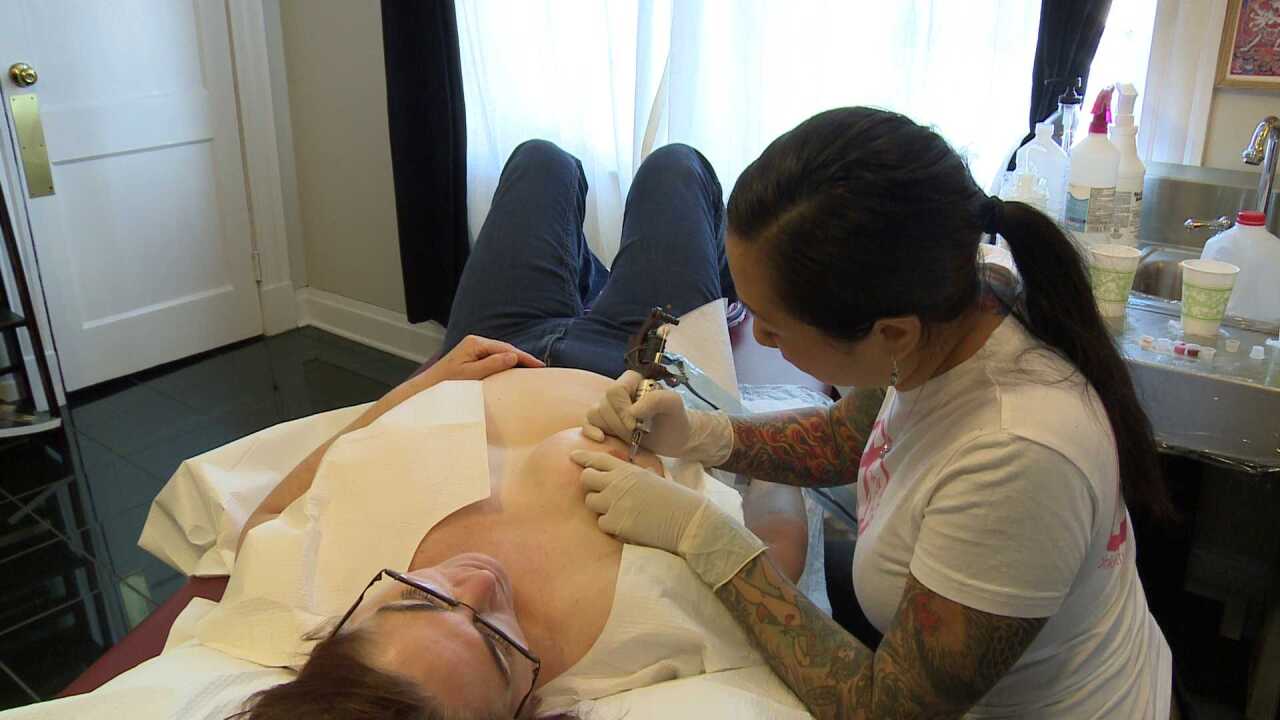 RICHMOND, Va. (WTVR)--Tattoo artist Amy Black is preparing to create another work of art on skin.

On a Saturday morning in Carytown, her client is there inside the Trademark Tattoo studio for more than just some ink. While Amy might be voted number one tattoo artist in a city considered the third most tattooed in the nation (per capita), her remarkable gift is body art that heals the soul.

“It changed the way I saw myself and felt about myself,” Susan Siegel told us. “It just makes you feel a little bit whole.”

For Susan, that need to feel whole again came after her breasts and ovaries were removed following a 2007 breast cancer diagnosis and a positive BRCA gene test. The gene test checks your risk for hereditary breast and ovarian cancer.

“I went through a series of surgeries,” Susan says. “I had six in about 14 months.”

After her breast reconstruction, she asked her plastic surgeon for nipple tattoos; a procedure sometimes performed by the surgeon or a technician in their office. Susan says she was not happy with the results.

“Basically what he did was a draw a circle and I thought it looked awful."

She says Amy, who she found on-line, gave her so much more.

“What I bring to it from my fine art background is trying to recreate the effect of light and shadow to create a 3-D effect,” Amy says.

The results are incredibly realistic.

Amy has been creating nipple tattoos for two years, starting after she received an unexpected phone call from a breast cancer patient.

It takes her about 35 to 40 minutes to complete a nipple tattoo for each breast.  Professionally, the procedure can cost as little as $100 per breast to as much as $5,000 per breast. Amy says she charges $150 per breast.

Insurance coverage varies, depending on the company and the situation.

“The reward I get is being able to use all the talents I’ve been given and be able to be of service to others,” Amy says.

Some clients like Dawn Carter, want something different.  A cherry blossom chain on her chest now symbolizes that cancer was a small part of Dawn’s life.

“I looked at breast cancer as a very fleeting chapter of my life,” Dawn tell us. ”This is a very short period of my life and that’s what those blossoms represent.”

Both women say they’ve gained something they hope is as permanent as their tattoos.

“I’ve gained more than a beautiful piece of art on my chest, I’ve gained a friend,” Dawn says.

Amy manages a charity called the Pink Ink Fund for women who need help paying for the service.

Click on this link to learn more about the fund or how you can donate:  http://pinkinkfund.org/