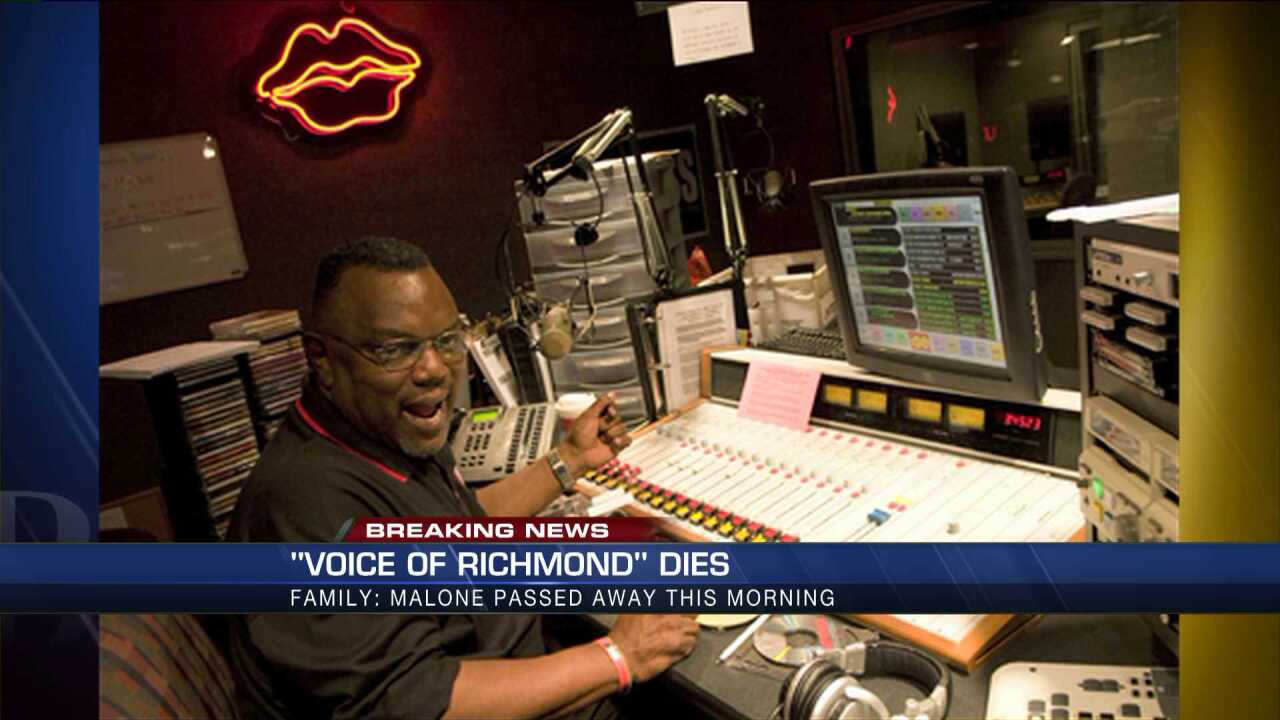 James D. Mitchell, who was known as Mitch Malone on the radio, hosted the highly rated Quiet Storm radio show weeknights from 7 p.m. to midnight at Radio One-KISS FM.

The Petersburg native graduated from Virginia State University and later served as music and sports director for the university radio station.

He also worked in several other markets, including Greensboro, Baltimore, Norfolk and Raleigh-Durham.

Malone signed on as the overnight DJ at 100.3 FM (WSOJ), which would eventually become KISS FM, in the early 1990s.

On Monday evening the radio waves of Richmond’s KISS FM carried sad news to its listeners.

"We've been letting everybody know about a great loss here at radio one. At 5 am this morning we were informed of the passing of the great voice of the  quiet storm of Richmond, Mitch Malone," said Sheilah Bell, radio host at Praise 104.7.

The stories close to heart are often hardest to tell. That was surely the case as colleagues spoke of Malone.

"I can't even bring myself to say the late Mitch Malone," said host Antoinette Essa as she announced the news of Malone’s passing.

Malone’s story couldn’t be any closer to the hearts of his radio colleagues.

"Mitch is the voice of the city, not just Richmond but Petersburg," said Jeff Anderson, Operations Manager at Radio One.

Colleagues called Malone the maestro, a radio legend and absolutely meticulous at his craft.

"That voice, that baritone voice of his, as soon as he spoke it commanded attention," said host Cousin Keith.

It was smooth as silk every night on his long time number one rated radio segment the Quiet Storm.

The Petersburg native and VSU graduate had spent decades as a radio personality. His hometown personality never forgot his roots in fact he gave an appearance or a shout out any time he got a chance. Many times he did it without ever telling the promotions department.

"You were at the library reading with the kids or doing a fundraiser in the city, I’d say why didn't you say anything  and he would say you know I just do what I do," said Anderson.

Just yesterday after hearing a sermon about Thanksgiving at church, Malone posted on his own set of thanks on his Facebook page. He gave  thanks to his listeners, to his family and thanks for a long career with wonderful colleagues. It was as if he knew his time was short.

"Knowing what was in his heart, what he put on paper, the timing of it, it was like god taking him home, saying you're right come on home," said Bell.

Additionally, Malone served as a fill-in traffic reporter on WTVR's morning news in the early 2000s. KISS-FM Vice-President and General Manager Linda Forem said Malone had one of the best and most soothing voices to ever grace Richmond radio or television.

"I recall during the horrible storms over the years, when thousands of people had lost their electricity and were only able to stay connected via the radio,
listening to Mitch truly soothed us. I got letters from listeners telling me that without Mitch, they would have been frightened," said Forem in a news release. "He was also a very proud Alumni of Virginia State University, where his daughter graduated as well. We’re in complete shock here, and trying to digest this terrible circumstance.”

As word of Malone's death spread on social media, listeners flooded his Facebook page with condolences.

Malone is survived by his daughter, son and a fiance. Funeral arrangements are pending.

Watch CBS 6 News starting at 11 p.m. and stay with WTVR.com for updates.