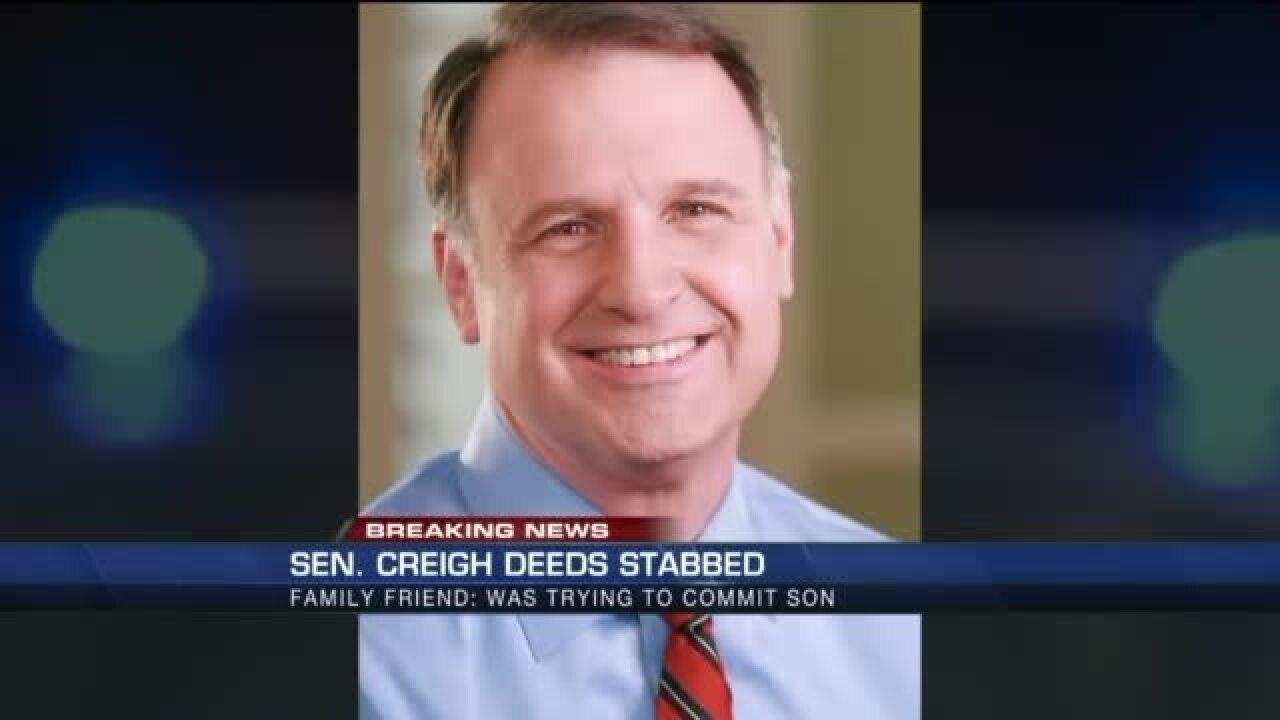 BATH COUNTY, Va. (WTVR) - Virginia Senator Creigh Deeds' condition has been upgraded from critical to fair after he was stabbed "multiple times" during a fight with his son Tuesday morning, according to Virginia State Police spokeswoman Corinne Geller.

The senator's son, 24-year-old Gus Deeds, died in the family's Bath County home from a gunshot wound, Geller said. Police are investigating the incident as an attempted-murder and suicide.

Senator Deeds' son, Austin 'Gus' Deeds, was found inside the residence, suffering from life-threatening injuries associated with a gunshot wound,” Geller said. “Despite efforts by trooper and first responders, he died at the scene."

Before victims can be med-flighted, they must be stabilized. In a 3:30 p.m. press conference, Geller said that Creigh Deeds’ cousin found him walking on the road near the house, bleeding profusely.

"After the stabbing, Senator Deeds left the scene on foot and walked down the hill of his residence to Route 42," according to Geller. "The injured senator was spotted and picked up by a cousin who was driving along Route 42. The two drove to the cousin’s residence where the 911 call was placed to the sheriff’s office."

A friend of the Deeds’ family said that the cousin that the cousin’s wife, a nurse, focused on stopping the bleeding. With Deeds’ stabilized, he was flown to University of Virginia Medical Center.

Gus Deeds underwent a mental evaluation Monday, according to a report in the Richmond Times-Dispatch. A family friend of the Deeds’ told CBS 6 reporter Melissa Hipolit that Gus was experiencing mental health problems and the family wanted to admit him to an institution.

"Dennis Cropper, executive director of the Rockbridge County Community Services Board, told the Richmond Times-Dispatch that the emergency custody order, or ECO, allowed Gus Deeds to be held as long as four hours to determine whether he should be held longer, up to 48 hours, under a temporary detention order," the newspaper reported. "The son was evaluated Monday at Bath Community Hospital, Cropper said, but was released because no psychiatric bed could be located across a wide area of western Virginia."

Bath County Sheriff told CBS 6 reporter Melissa Hipolit that they were called to the Deeds’ residence on Monday, at 11 a.m., but declined to comment why.

The investigation into the motive and sequence of events regarding Tuesday's violence remained under investigation, Geller said.

Sen. Deeds has been able to speak to investigators, however Geller would not share what was said.

"Unfortunately it's not like a TV show where you can have an entire case wrapped in an hour," Geller said. "It's a very complex investigation treated like any incident we'd respond to. There's a substantial amount of evidence that must be collected and maintained."

Geller said a weapon was recovered from the scene. Around 6 p.m. the Bath County Sheriff said that they are stopping the investigation for the evening, and will resume tomorrow.

Gus Deeds had been a student at the College of William & Mary in Williamsburg.

"William & Mary is very saddened to hear this tragic news. Gus Deeds was a member of the William & Mary community. He had been enrolled as a student at William & Mary since 2007, though not continuously. He withdrew from the College last month and was not currently enrolled at the time of his death. Our hearts go out to the entire Deeds family," William & Mary Associate Vice President Communications and University Relations Brian Whitson wrote in a statement.

Deeds now represents the 25th District, known as Bath County, which is west of Charlottesville. In the past Deeds has lost two races to Gov. Bob McDonnell. He lost the attorney general race to McDonnell in 2005 by a narrow margin of 360 votes. Then in 2009 he ran against McDonnell for governor of Virginia.

"In this tough and sad time, our thoughts and prayers are with the Deeds family. The news from this morning is utterly heartbreaking. Creigh Deeds is an exceptional and committed public servant who has always done what he believes is best for Virginia and who gives his all to public service. He cares deeply about Virginia, and the people of Virginia care deeply for him. I urge all Virginians today to join me in praying for a full and complete recovery for Creigh and for many more years of his public service to the Commonwealth. At this moment, our state unites in prayer for Creigh Deeds and his family."