As Virginians head to polls, some vote for ‘lesser of two evils’ 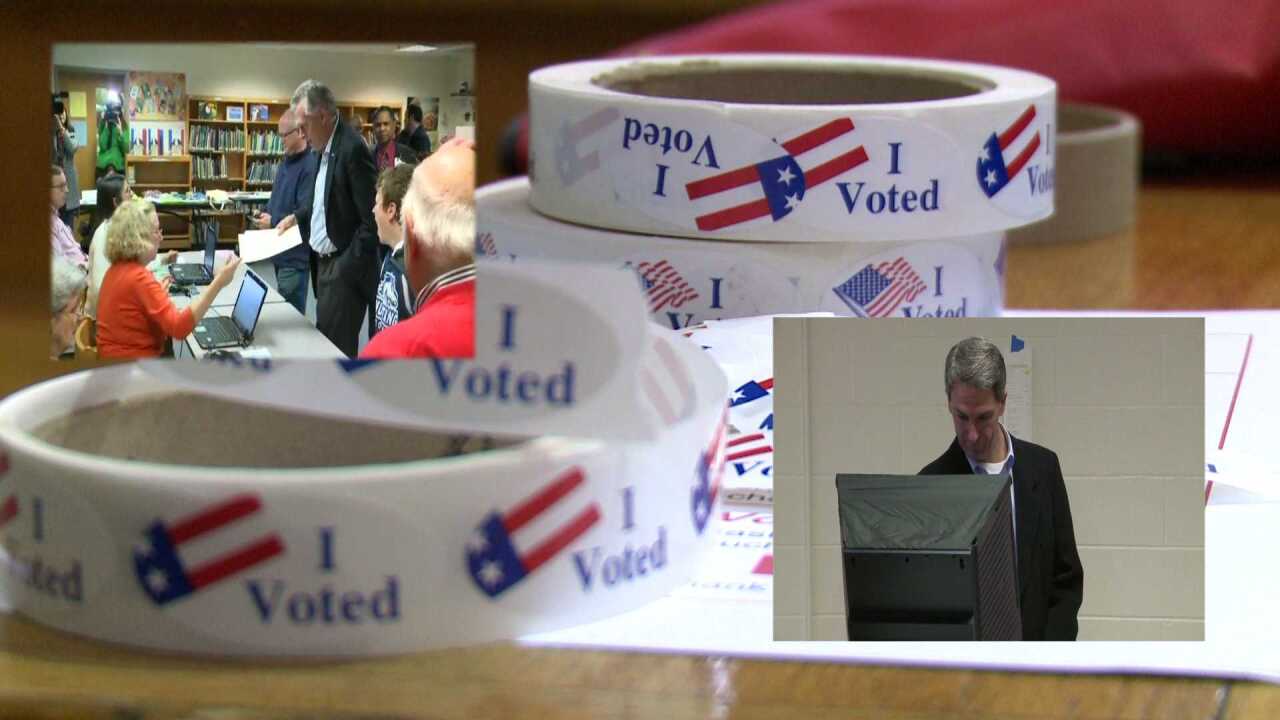 RICHMOND, Va. – As voters in Central Virginia headed to the polls on Tuesday morning to cast their votes in the gubernatorial election, there was very little enthusiasm about the choices on the ballot.

In interviews with reporters from VCU’s “iPadJournos” project, many voters in Richmond and in the surrounding counties of Henrico, Chesterfield and Hanover said that they were dissatisfied with Democratic gubernatorial candidate Terry McAuliffe and his Republican opponent Ken Cuccinelli, but decided to chose the “lesser of two evils.” While many voted along their usual party lines, several voters said that they chose Libertarian candidate Robert Sarvis instead.

Read in the following parts how voters in central Virginia cast their ballots and which candidates they chose.

Several voters interviewed at the Richmond polling station at Tabernacle Baptist Church on Grove Avenue said that their vote was more “anti-Republican” than it was an endorsement for the Democratic candidates.

James McPherson, a VCU student who voted at the church on Tuesday morning, said that McAuliffe wasn’t his first choice for governor, but he voted for him, because he thought McAuliffe would be “the lesser of two evils.” As for Cuccinelli, McPherson said that “I just do not agree with his extremist politics. I don’t think they have a place in any government.”

Scott Sherman, a professor at VCU, echoed McPherson’s sentiments as he exited the polling station. “I thought that Ken Cuccinelli was crazy and I thought Jackson was a little nutty as well,” Sherman said about the Republican candidates for governor and lieutenant governor.

Andrea Publow, who works as an administrator at VCU, said that social and women issues were the main reasons why she voted for the entire Democratic ticket. “I’ve watched in horror, as a woman, over the last couple of years the social issues that have been brought to the floor and I think the Republican choices are fascism, to be perfectly honest with you,” Publow said. “I felt very strongly that, as a woman, I needed to get out to vote today,” she added.

Daniel Seth Potter, who works as an administrative assistant in the West End, voted for the Republican ticket, but said he thought McAuliffe would likely win the election. Potter said health care issues and government spending were the main reasons why he voted for Cuccinelli in the election.

As Henrico voters headed to the polling station at Ruby F. Carver Elementary School on Lauderdale Drive, many said that they were not happy with the choices they had on the ballot. “I thought it was a down and dirty election,” said retiree Donna Payne. “I heard so few issues that were important being discussed. I just heard and saw a lot of mudslinging.”

Elementary school teacher Vicky Levonne said that the decision was difficult for her. “The candidates were both so nasty with their ads that it made me like neither one of them.” But despite their reservations with the candidates, many voters said that they were voting along their usual party lines.

John Cagenson, a carpenter, said that although he doesn’t know much about the election and the candidates backgrounds, he was planning to vote based on his faith, his morals, and the fact that he is self-employed. “I know that small business is a big part of growing the economy, so I’m usually directed towards more of a conservative view,” said Cagenson. “I don’t necessarily try to let politics run what I believe, but my beliefs carry what my decisions and politics are.”

Dionne Henry, a Capital One Employee, said that “We need to push the local elections just as much as we push the presidential elections, so it’s important to me to get out there and vote.”

Although Henry voted Democratic this time, she said that she always likes to look at both sides and make an informed decision.

David Bailey, a pharmacist, said that he aligns himself with the Libertarian party, but added that even though a Libertarian candidate was one the ballot, he felt compelled to vote for someone who has the potential to win. “I’m a fiscal conservative, bit of a social liberal, but I’m not voting for any Democratic candidates, which is a first time,” he said and added that because of his opposition to Obamacare and his dislike of Terry McAuliffe, he voted for Ken Cuccinelli, even though he was not fully convinced of him either. “Sometimes you have to go with the lesser of two evils,” he said.

Many voters thought that the gubernatorial race would turn out to be a close one. “It’s so divided. It’s going to come down to turnout,” said Kevin Northrop, an accountant.

Despite the cold weather and early hours, there was a large turnout of voters at J.B. Watkins Elementary School in Chesterfield County right after the doors opened in the morning. For Penny Pyers, an IT procurement analyst, Obamacare was the main concern in her choice. She voted for Cuccinelli but said she would not have, if it was not for Obamacare.

“It’s kind of like picking the least of the worst,” said Pyers. “In this particular situation, Obamacare is more of an issue for me than the other things are.”

Serena Walker, a 20-year-old non-profit worker, believes it’s important for young people to vote and to hold on to the values that her parents taught her. “I was pleased with the way he served Virginia as attorney general,” said Walker, who voted for Cuccinelli. “The issue that spoke to me the most is how he stood up for human rights and fought against human trafficking.”

Other voters critiqued the way the candidates carried themselves throughout the campaign. Attorney Dave Watson said he was impacted by the streak of attack ads in McAuliffe’s campaign. “All I heard coming out of the McAuliffe campaign was attacks on Cuccinelli and I don’t think he ever made a case for why someone should actually vote for him,” said Watson.

Insurance adjustor Gregory Williams voted for McAuliffe, because he is not satisfied with how the Republican party manages its money. “I voted for Terry McAuliffe,” said Williams. “I think he’s a little more fiscally responsible than the other candidate.” He added that the Star-Scientific scandal also played a role in his decision making.

“He did some things that have just been wasteful for taxpayers,” said Williams. “As attorney general, he kind of did some things that were off the wall to me and didn’t make a lot of sense.” He also noted that he is never attached to one party in particular, and that it’s important to know the background of candidates prior to voting. “I don’t just strictly vote Democrat because it’s a Democrat. I always look at the issue and what’s going on and some of the past histories of the candidates before I decide who I’m going to vote for,” said Williams.

Polling station at the Courthouse in Hanover County

Early Voters at the polling station at Hanover Courthouse said in interviews that there was no wait to vote Tuesday morning, which gave retired fireman Russ Acors little time to make up his mind. He said he hadn’t made his decision on his vote until moments before he walked through the courthouse doors, but added that he was leaning toward Sarvis.

“It is difficult. There are things that I don’t like about both of them,” Acors said about McAuliffe and Cuccinelli. “To be honest, I’m really leaning toward the third candidate.” He added that “Based upon what I’ve read and what I’ve seen, he’s a balance of both and we need a little more balance. Far right, far left doesn’t work.”

Patsy Fowler, a registered nurse, voted for Cuccinelli because of his pro-life views. She said her job as a nurse, being surrounded by newborns every day, played a large role in her voting decision. “I thought that it was a very ugly campaign,” Fowler said. And I’m very pro-life and I voted for Cuccinelli.”

While Fowler hopes Cuccinelli is able to pull off a victory in the election, she fears that McAuliffe’s massive fundraising success will land him the job as Virginia’s next governor. “I’m afraid that McAuliffe is going to win,” Fowler said. “A lot of money has been poured into his campaign.”

Abel and Acors, on the other hand, believe it will be very close. “It’s going to be very tight and very close,” Abel said. “I’m hoping the one I voted for wins.” And Acors said that “It’s too close to tell.”

Polls around Virginia will close at 7 p.m. on Tuesday.