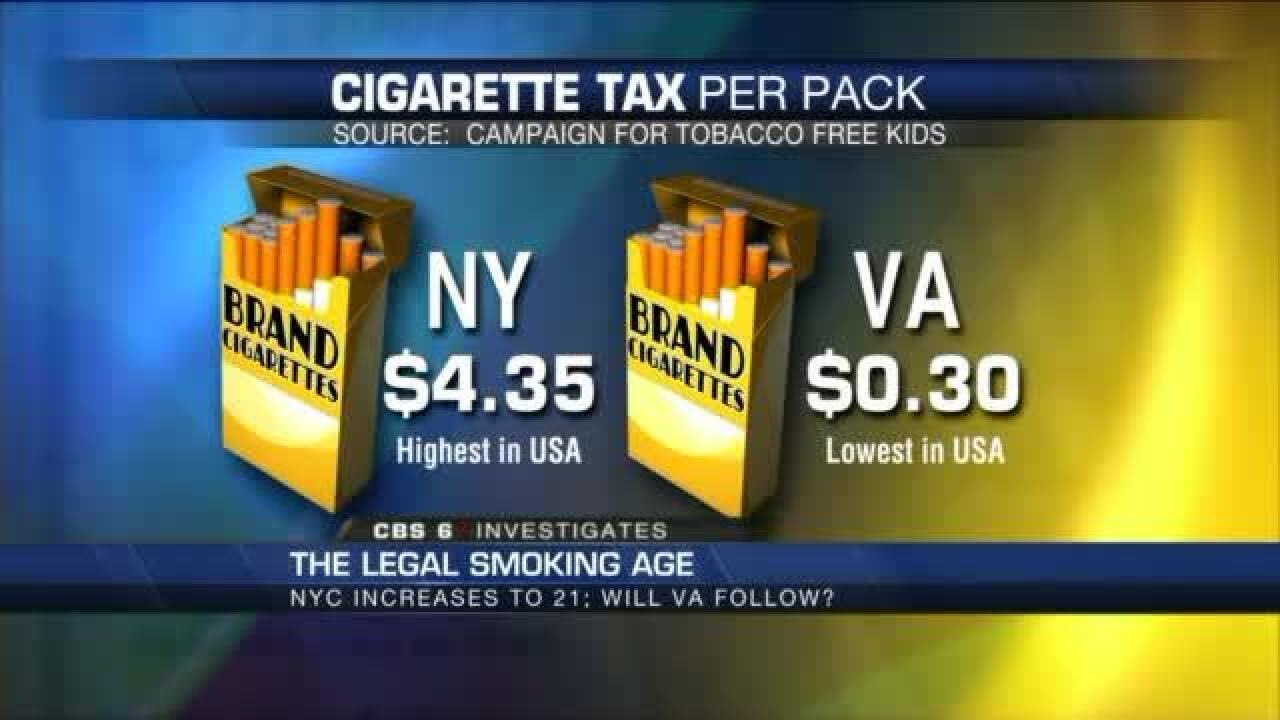 RICHMOND, VA (WTVR/CNN) -- The New York City Council voted on Wednesday night to approve an anti-tobacco law that will raise the tobacco-purchasing age from 18 to 21.

In addition to the "Tobacco 21" bill, which includes electronic cigarettes, the council also approved a second bill, "Sensible Tobacco Enforcement." It will prohibit discounts on tobacco products and increase enforcement on vendors who attempt to evade taxes.

While New York City is far from the City of Richmond, the actions of city leaders were the talk among some smokers in Virginia Wednesday.

"It doesn't make any sense. You can go to war but you can't buy a pack of cigarette?," Austin May, an avid smoker, said.

Meanwhile, some other Virginia smokers are embracing the actions of New York City leaders.

"It would have definitely prevented me from doing it," Joe Brown, a 19 year old smoker, said.

"I feel like it would be a responsible decision since cigarettes are definitely bad for you," Brown added.

The Virginia Foundation for Healthy Youth is not taking an official position on New York City's actions, but Richard Foster, a spokesman for the group, did say that studies show the younger the person is when first exposed to a cigarette the more likely he or she is to become addicted.

"According to our studies, I think it is just because the way their brains are structured," Foster said.

But could New York City's new law happen in Virginia?

Technically yes, but the odds are very slim if you speak with politicians.

Loupassi, who sits on the state crime commission, says if any new legislation regarding cigarettes are likely to take place - it would happen in the realm of e-cigarette legislation.

Loupassi did not seem to think the NYC law would increase cigarette smuggling to the state from Virginia.

Currently the state tax on a pack of cigarettes in Virginia is $0.30 cents, while the cigarette tax in New York is $4.35 cents per pack.