HOLMBERG: How a vampire came to haunt a Richmond cemetery 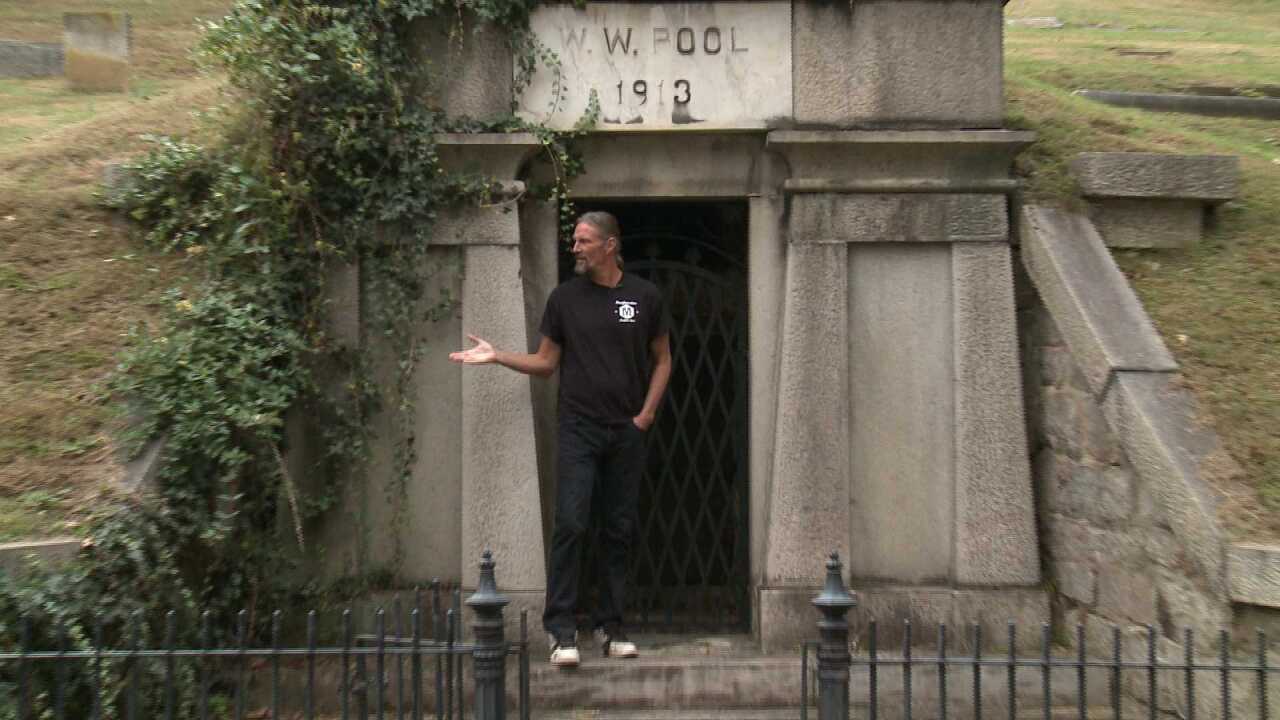 RICHMOND, Va. (WTVR)--One almost century-old  mausoleum in Hollywood Cemetery has long been haunted by stories of it being the home of a vampire.

So persistent are the stories, occasionally Satanists and others interested in the occult have gathered there.

Inexplicably, a broken glass was once found by a groundskeeper  inside this locked and sealed mausoleum of W.W. Pool, according to the book, “Haunted Richmond.”

One of stories shared about this spot that has lingered for decades is linked to one of Richmond’s most fascinating and enduring legends, the 1925 collapse of the Church Hill Tunnel.

This 4,000 foot-long tunnel had been a nightmare since the deadly construction began in 1871. The soft, soapy soil consumed tunnel workers like M&Ms. Occasionally, the menacing, snakelike passage that linked Richmond to the east would kink its back and cause buildings above to tilt or sink.

Chesapeake and Ohio Railroad officials feared and hated the seemingly haunted tunnel, and breathed a collective sigh of relief when the then-amazing elevated railroad viaduct was built alongside the north bank of the James River, rendering the old, narrow gauge tunnel moot.

It was closed in 1915. But the railway decided it could be used for some traffic and began widening it in 1925.

Sure enough, on October 2, members of the large work crew were felled by the cursed  tunnel. A brick fell from the arched ceiling, slamming into one of the 10 railroad flatcars pulled by steam locomotive 231.

"Watch out, she's a-comin' in!" shouted the burly 28-year-old fireman, Benjamin Mosby, according to news reports at the time.

A section above the work train collapsed, entombing engineer Tom Mason at the throttle. At least one and probably two or three of the 200 or so laborers inside also were buried alive. Record keeping on the crew wasn’t detailed, and some transients – the equivalent of day laborers – were apparently in there.

Mosby, the tough guy fireman, was horribly burned, his face and teeth smashed. But he managed to crawl under the flatcars and run for it.

Imagine: The collapse had also killed the lights. Workers had to run nearly a mile, tripping over railroad ties and each other. George Raborg, a carpenter on the crew, told reporters there was pandemonium. Some workers pulled their knives, ready to cut anyone who got in their way.

According to lore from Gregory Maitland and the Virginia Ghosts & Haunting Research Society, witnesses watched a muscular, ghastly figure with flesh hanging off of it and jagged teeth rush out of the tunnel and run towards the James River. It was chased by a group of men, who saw it disappear into the mausoleum in question.

But Maitland has said the ghostly figure was, of course, fireman Ben Mosby.

According the news reports, the brave Mosby was taken to the old Grace Hospital, a building still at 401 W. Broad Street,  where he died from his ghastly injuries.

The laborers, Engine 231 and the ten flatcars remain buried inside the tunnel of misery.

And the mausoleum remains haunted, at least by legend.