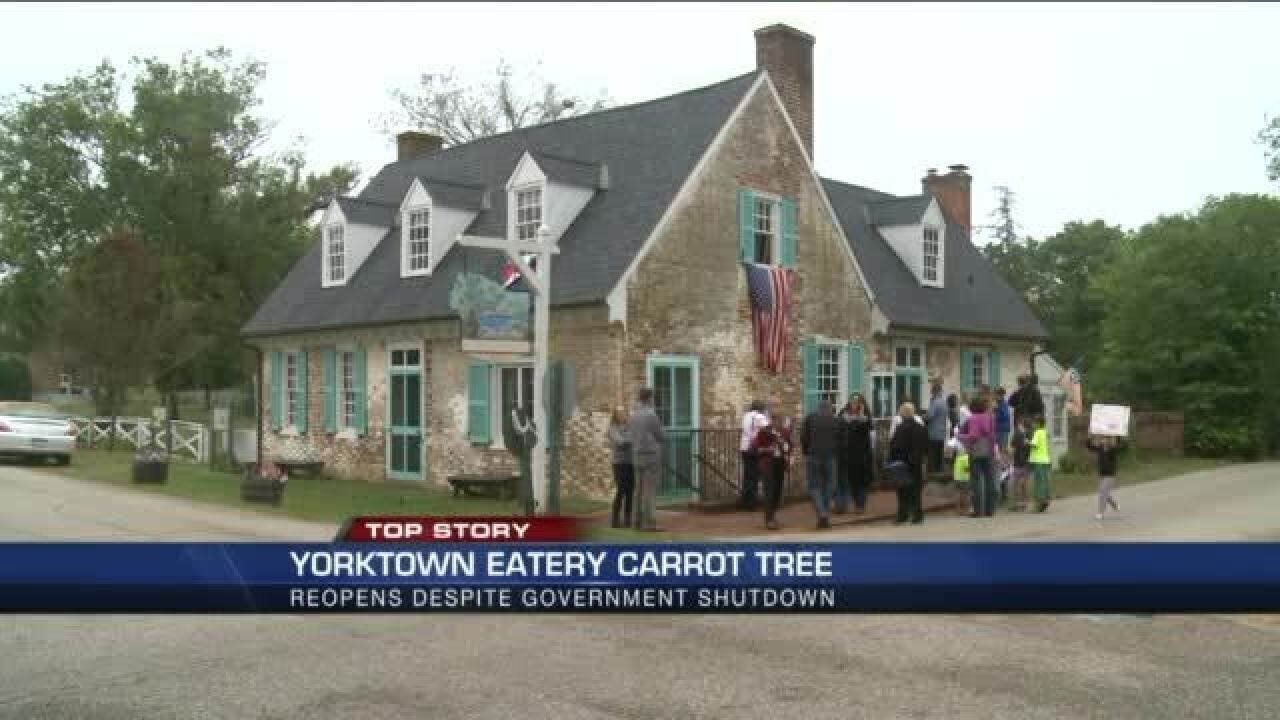 YORKTOWN, Va. (WTVR) -- Supporters of a Yorktown eatery forced to close because of the government shutdown are flocking to the business after it reopened this week.

Glenn Helseth, the manager of the Carrot Tree Kitchens at the Cole Digges House on Main Street, called the shutdown a "snag of epic proportions."

"I got the call on 9 a.m. from the park service informing me to close," said Helseth. "I had three hours to close down both restaurants.”

Helseth was forced to close the restaurant on Oct. 1 because the Cole Digges House is owned by the National Park Service.

The business stayed shuttered for a week, but then Helseth decided to defy the government order and reopen the restaurant. From then on, Helseth said customers from near and far have been turning up to support the decision.

In fact, the real-life history lesson played out for a group homeschoolers in Yorktown. The little ones protested the government shutdown Friday outside the Carrot Tree holding signs that read: "Give me liberty... and sell me cake!"

The group wanted to to send leaders in Washington, D.C. a strong message: Don't shut down the government -- or their favorite restaurant.

"We're very thankful that he decided to open and we do stand with him. We do think it's wrong to shut down National Parks and things. And to shut down his livelihood,” said Amber Libert, who brought the students for lunch.  "History can repeat itself if you're not well informed or educated."

Helseth said he is not backing down because October is such a critical month for the restaurant. In fact, he said 80 percent of his business is generated during the month.

"I'm willing to step across federal line to risk the penalty of trespassing what I consider to be my own property,” said Helseth.

While he is aware of the consequences, Helseth regrets closing the Carrot Tree in the first place.

“I didn’t know if I was going to be faced with the park rangers or what the situation was,” said Helseth.

Helseth insists he is doing the right thing and would never normally break the law. He said a park ranger did approach him after he reopened stating that he was in violation of the law by reopening. However, Helseth said the ranger quickly left, saying he could not talk more about the situation because he was furloughed.

Helseth believes there is a better way to end the government shutdown. And offers the following message to lawmakers on Capitol Hill.

"Come have some carrot cake. Let's end this now," he said.