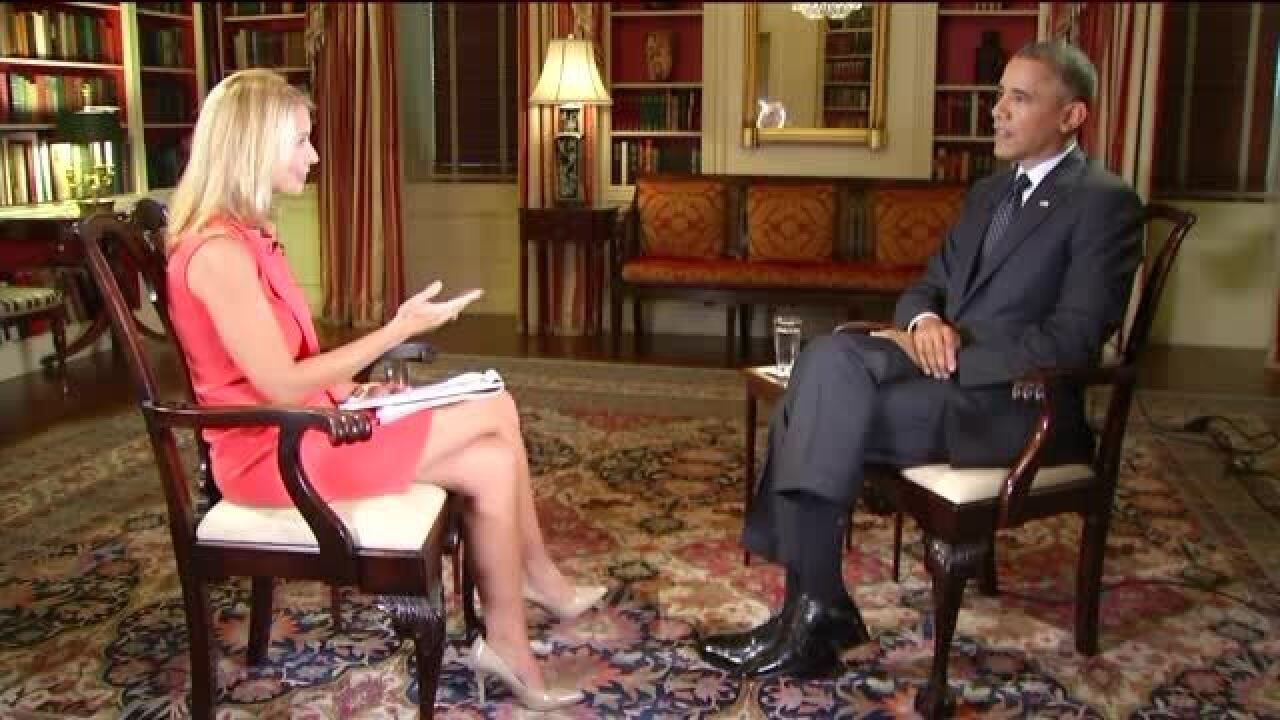 WASHINGTON, D.C. (WTVR) – President Barack Obama sat down with CBS 6 reporter Tracy Sears for a one-on-one interview Wednesday afternoon. The president answered questions during an eight-minute window. In that time we asked questions you wanted answered.

Tracy Sears: First of all, we have seen you a lot in Virginia this past presidential election and in Virginia in the past campaigning for various Democrats running for office, including Senator Tim Kaine. We haven’t seen you with Terry McAuliffe just yet. Will we?

President Obama: As you’ve noticed, there’s a lot of stuff going on around here. Trying to make sure we reopen the government and make sure America pays its bills. But as you might expect, I strongly support Terry McAuliffe. I think he’s going to be a terrific governor for Virginia and as soon as we get this out of the way, I think you’ll see a whole bunch of folks campaigning actively to make sure Mr. McAuliffe becomes the next governor.

Tracy Sears: There is so much at stake with this shutdown, particularly in Virginia where we have so many federal workers. How do you see -- or what do you see as the biggest impact to Virginia, to the Commonwealth right now.

President Obama: Well, as you mentioned, there are a lot of people who work for the federal government. And one of the most frustrating things I’ve seen in the political rhetoric is people denigrating federal workers. These are the folks who help veterans get what their benefits, help to keep us safe, help keep our water clean, help small businesses get loans. They work really hard. They don’t deserve what’s happening right now with this government shutdown. Right off the bat, you’ve got hundreds of thousands of people across the country who aren’t sure about their paychecks.

That also has an economic impact. It means the restaurants in Virginia, maybe they’re not getting as many customers because some of those federal workers are worried and holding back on spending. It means that businesses who provide services to the federal government. They’re not  getting paid, so that may have an impact on their payroll. So the ripple effects of this across the board are particularly damaging for this area, for Virginia.

That’s why what I’ve said repeatedly is this is completely unnecessary. The reason we are where we are right now is because Speaker Boehner, the House Republicans, thought that they could get leverage in budget negotiations – or defund the Affordable Care Act: Obamacare – by taking us to the brink and essentially trying to hold the entire U.S. economy hostage.

And what I’ve said is, I’m happy to negotiate – and Democrats have shown themselves happy to negotiate -- on any issue, but you can’t threaten to shut down the government as means of getting leverage in negotiations. You’ve got to take that off the table and I think most people understand that.

Tracy Sears: The House Majority leader said to us earlier this morning that he wants you to come to Capitol Hill. He wants to sit down. He wants to negotiate. He says it is your inability to do that that has caused this shutdown in the first place.

President Obama: Look, anybody who has been following this understands that I meet and talk with John Boehner all the time. And we’re prepared to negotiate on anything. I’ve said that publically repeatedly. I saw him just last week and talked to him just yesterday.

The issue is not whether or not we can negotiate. The problem here is that in a normal negotiation, there are things I think are really important to help us grow the economy: making sure our infrastructure, our roads and bridges are rebuilt, making sure that early childhood education is funded so that young people have a chance to get ahead. And John Boehner has other proprieties.

And in a normal negotiation another situation, you’d sit there and you’d say, ok, this is what you want, this is what I want. Nobody is going to get 100 percent of what they want. What Mr. Boehner has essentially said is unless I get what I want – completely -- then I’m not going to reopen the government.

Well, I don’t understand, and I don’t think most Americans understand, why do you need to shut down the government in order to have a negotiation? That doesn’t make sense, I think, to most people.  If most folks are having an experience… you know you’re selling your house. The buyer offers you one price and you’re offering to sell it for another. And the buyer says, well unless you take my price, I’m going to burn down your house. I don’t think people would call that a negotiation. They would say that doesn’t make sense.

What we need to do right now is, don’t harm the American people. Put folks back to work. Reopen the government. Make sure America is paying its bills. And we’re then in a position where we can have a good negotiation about how we move this country forward. I’m eager to do that and I’ve been asking the speaker to do this for the last year.

We’ve seen since the passage of the ACA, premiums have increased; employers like the University of Virginia have dropped spousal support. Companies like Home Depot, community colleges have taken full time staff and made them part time.  Are these anticipated consequences?

President Obama: A lot of this stuff has been happening for the last year several years, that doesn’t have to do with the Affordable Care Act, in fact premiums for the last three years have gone up at a slower rate than in any time in the last 50 years. So the problem that we had for a long time is that employers have found health care costs really burdensome, they’ve been loading up off costs on to workers for a very long time.

They only thing the ACA has done is create a marketplace for people who don’t have health care. What it’s done is it’s said you can now go and buy health care and its competitive, and it gives you choices, and if you still can’t afford It, then we’re going to provide you a tax credit to help you buy it.

And what we’ve already seen are thousands of people in Virginia who are currently benefiting and getting health insurance for the first time.  And what we’ve also seen is the system is beginning to get more efficient.

But that doesn’t mean that we are out of the woods. A lot of people are still hurting because there premiums are going up, their employers are shifting costs to them.  That’s why we have to keep working to improve the health care system. But that’s not because of the ACA.

Tracy Sears: There are a couple of people from our viewers. Jennifer Moore asks: “Why are you going to fine people for not having health care, when in reality if we could afford health care then we would have it in the first place.”

President Obama: Well this is what is called the individual mandate and here’s the problem.

If you don’t have health care but you get sick and you go to the hospital, and those costs. Shifted onto people how do have health insurance.

In fact the average family pays thousands in premium per year that are hidden subsidies for people who haven’t bought health care.

For less than a cellphone bill you can get this coverage.

But the only way you can do that is make sure everyone is getting health insurance. That’s a popular thing; everybody thinks you shouldn’t get barred from insurance because of preexisting conditions.

CBS 6 interactive producer Alix Bryan was also in Washington providing LIVE updates from the nation's capital. Scroll down for her updates.