CANTOR: ‘Obamacare is not ready’ 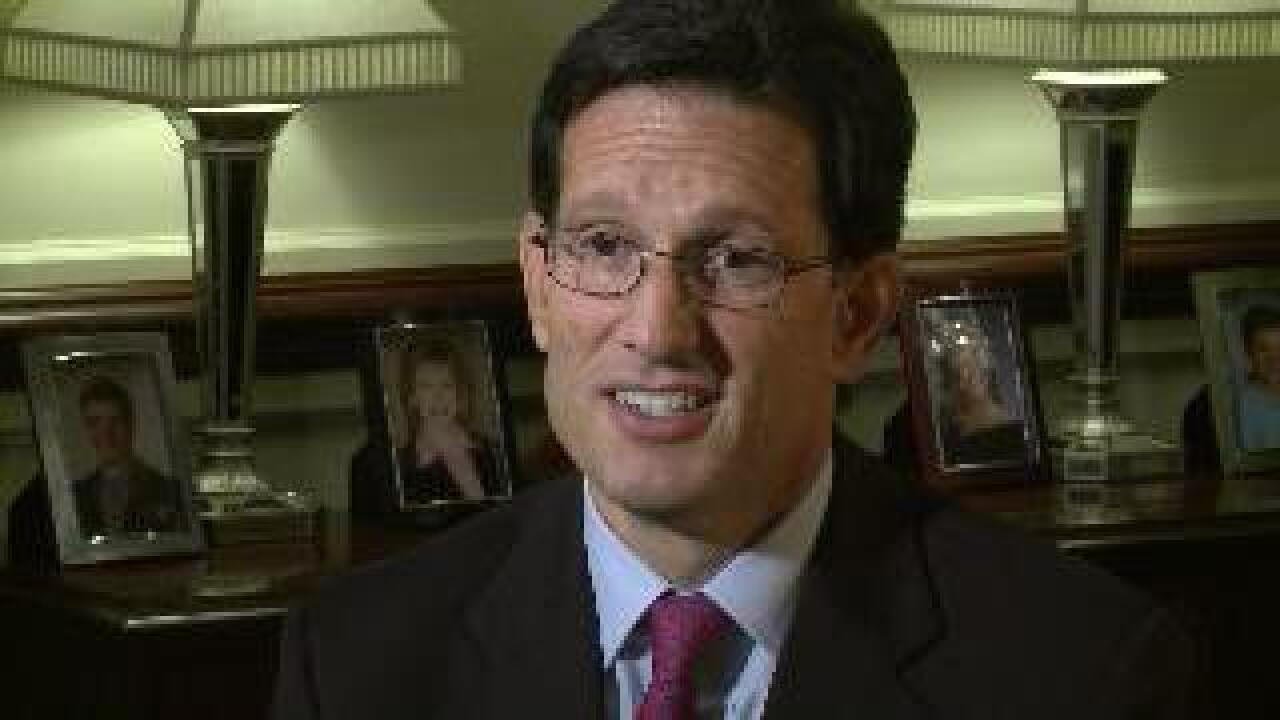 Watch the videos to see Sears' complete interview with Cantor. The following is a partial transcript:

Tracy Sears: Have you called the president?

Tracy Sears: Speaking of your important role as House Majority Leader, people are going to say, look, the Affordable Care Act passed in 2010, it was signed by the president, it was upheld by the U.S. Supreme Court, why not fulfill your constitutional responsibility to fund it?

Eric Cantor: It’s very simple the position we are taking on the Affordable Care Act. And it is the fact that people are having difficulty even signing onto the websites now, and I think even the administration would admit that Obamacare is not ready. And all we’re saying is relieve people from paying the tax. Right now if you’re unable to get on the website, unable to purchase the insurance, the government and the law says that you have to pay a tax equal to either $95, or one percent of your income, whichever is greater. All we’re saying is don’t tax people. The businesses have been granted a waiver of the tax, we ought not be taxing people while this program is getting up and running, because it’s just not ready.

Tracy Sears: Why not pass a continuing resolution for now? Get the government working again, and then address that in Congress?

Eric Cantor: The problem has been there hasn’t been any negotiations over the last couple year. You know, we sat down two years ago when he had a similar situation of a debt ceiling, and since then there’s been no discussion, no conversation, no talks with the president about how we can go forward together. And that’s been very unfortunate, and I think it’s been a pattern of this administration to really just try to go around Congress and try and exert whatever it can through the regulations process, rule making, etc, and again going back to the nature of our constitutional republic, there are equal branches of government, I think the American people demonstrated that they wanted a divided government because their voices could be heard on either side depending on what you believe, but again the expectation is that we work together.

And I think when you say well why don’t you just do what the president says, is there are a lot of people in this country who feel that we’ve got to be addressing the debt and deficit. And the president has never put forward a real attempt to try and forge that solution. And what we know right now is the president is asking for a trillion dollars in additional debt, that’s what’s going on here, without any attempt to try to address the reduction in spending. And the reform of the programs that is causing that debt to mount. We want to see some progress on that, and that’s why we’re saying let’s sit down and talk so that we can resolve our differences.

Tracy Sears: So why are we in the 11th hour here? Why wasn’t this discussed before?

Eric Cantor: We have been trying to discuss this before. And this is my, this is the case, and I have implored the senate majority leader to sit down and talk, we passed a bill out of the House calling for the appointment of a conference committee to sit down and talk so we can iron out our differences on the way we go forward funding our government, we’ve provided in the House vehicles that are now sitting in the Senate that will relieve the pain on the moms and dads in Virginia and the families that are suffering because of the shutdown. We’ve provided the answer to say hey, we don’t think political pressure right now is what you need, we think relief of pain and then sitting down and talking is the right way to go.