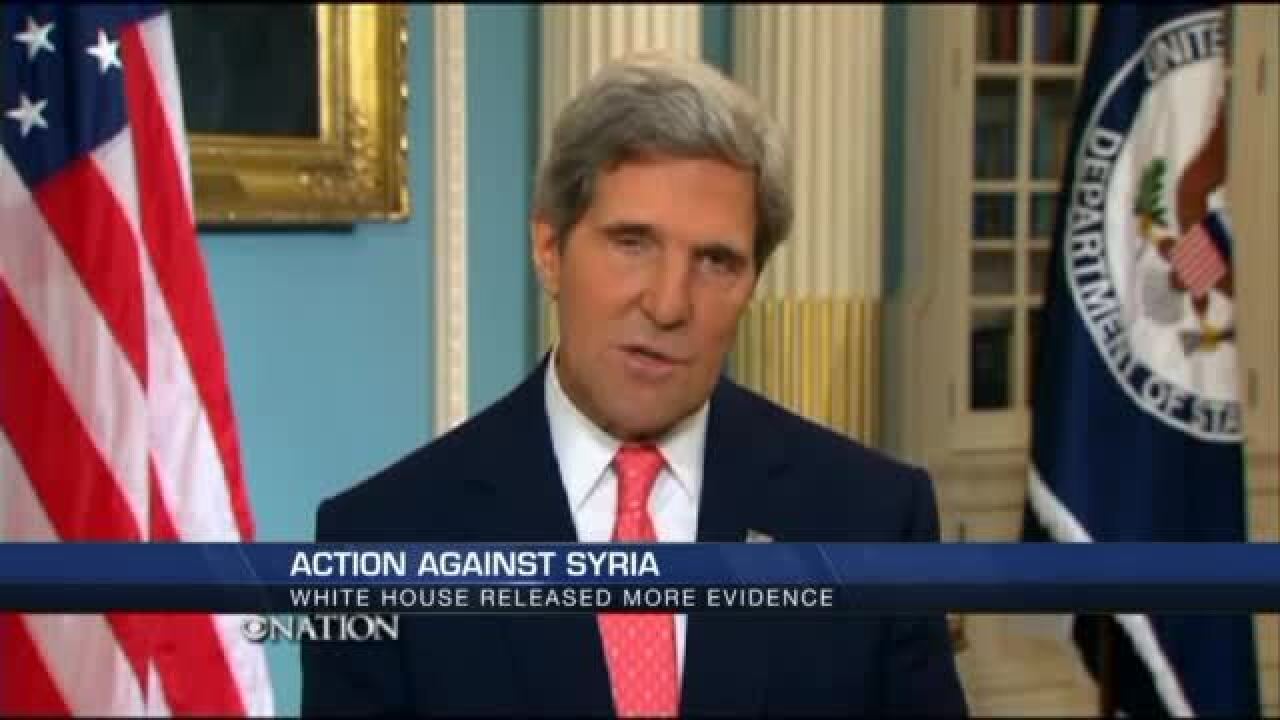 (CNN) -- Blood and hair samples from eastern Damascus, Syria, have "tested positive for signatures of sarin" gas, Secretary of State John Kerry said Sunday, arguing that with "each day that goes by, this case is even stronger."

Kerry said on CNN's "State of the Union" that the U.S. obtained the samples "independently" through an "appropriate chain of custody," not the United Nations chemical weapons inspectors.

"We know that the regime ordered this attack, we know they prepared for it," Kerry said. "We know where the rockets came from. We know where they landed. We know the damage that was done afterwards. We've seen the horrific scenes all over the social media, and we have evidence of it in other ways, and we know that the regime tried to cover up afterwards, so the case is really an overwhelming case."

On Saturday, President Barack Obama said "well over 1,000 people were murdered" in the August 21 attack. The president proposed what he said would be a limited military action against Syrian President Bashar al-Assad; however, he plans to seek authorization from Congress before taking any further steps.

Sarin gas is one of the most toxic chemical weapons. Dr. Sanjay Gupta, CNN's chief medical correspondent, said a fraction of an ounce of sarin on a person's skin could be fatal.

"It can be absorbed across the skin, it can be absorbed into the lungs, across the eyes. It's pretty gruesome stuff," he said on CNN's "Piers Morgan Live." "It is so indiscriminate. It is tasteless. It is odorless. You can't see it. And, so you don't even know that you've been exposed, necessarily, until you suddenly start to get sick. And then, it starts pretty quickly and can degrade pretty quickly as well."

Top U.S. officials have said there's no doubt that the Syrian government was behind the attack, while Syrian officials have denied responsibility and blamed jihadists fighting with the rebels.

While British and U.S. intelligence reports say the attack involved chemical weapons, U.N. officials have stressed the importance of waiting for an official report from the U.N. chemical weapons inspectors.

The inspectors left Syria on Saturday, carrying evidence that will determine whether chemical weapons were used in the attack last month. Those results could take up to three weeks.

Kerry defended the president's decision to seek authorization from Congress before taking military action saying, the move will make the United States "stronger in the end" should the country decide to move forward with a strike.

"It's amazing to me to see people suddenly standing up and taking such affront at the notion that Congress ought to weigh in. I mean, I can hear the complaints that would have taken place if the president proceeded unilaterally and people say, 'Well why didn't you take the time to consult?'"

Addressing concerns that a congressional vote may not take place until next week, Kerry said military action against Syria is not something that needs to happen as soon as possible, like previous situations.

"Since it is not an emergency overnight, as we saw in a place like Libya, where people were about to be slaughtered. Since we have the right to strike at any time if Assad is foolish enough to engage in yet another attack, we believe that it is important before this takes place to have the full investment of the American people and of the Congress," he told CNN's chief political analyst Gloria Borger.

It's unclear how both chambers of Congress will vote on military action in Syria, as the debate is expected to intensify in the coming days. Congress returns from recess on September 9, but some are calling for lawmakers to come back earlier for a special session so a decision can be made sooner.

Critics have accused the president of being weak and not taking the initiative to launch a strike on his own. Kerry reiterated that Obama has the right to make that call "at any point in time" but added he's "confident" Congress will side with the president.

"I personally believe at a time when the institutions of governance are being doubted by many people, I think this is a very courageous decision. I think it is a big presidential decision, and no one should misinterpret it, particularly Assad or the opposition," he said.

With the British Parliament voting last week against joining a military invention, Kerry argued the United States still has a "coalition of more than a few" and predicted broader support "as the evidence comes out."

"I think voices will grow over the next days as people see the evidence, and that evidence is becoming more powerful every day," he said.