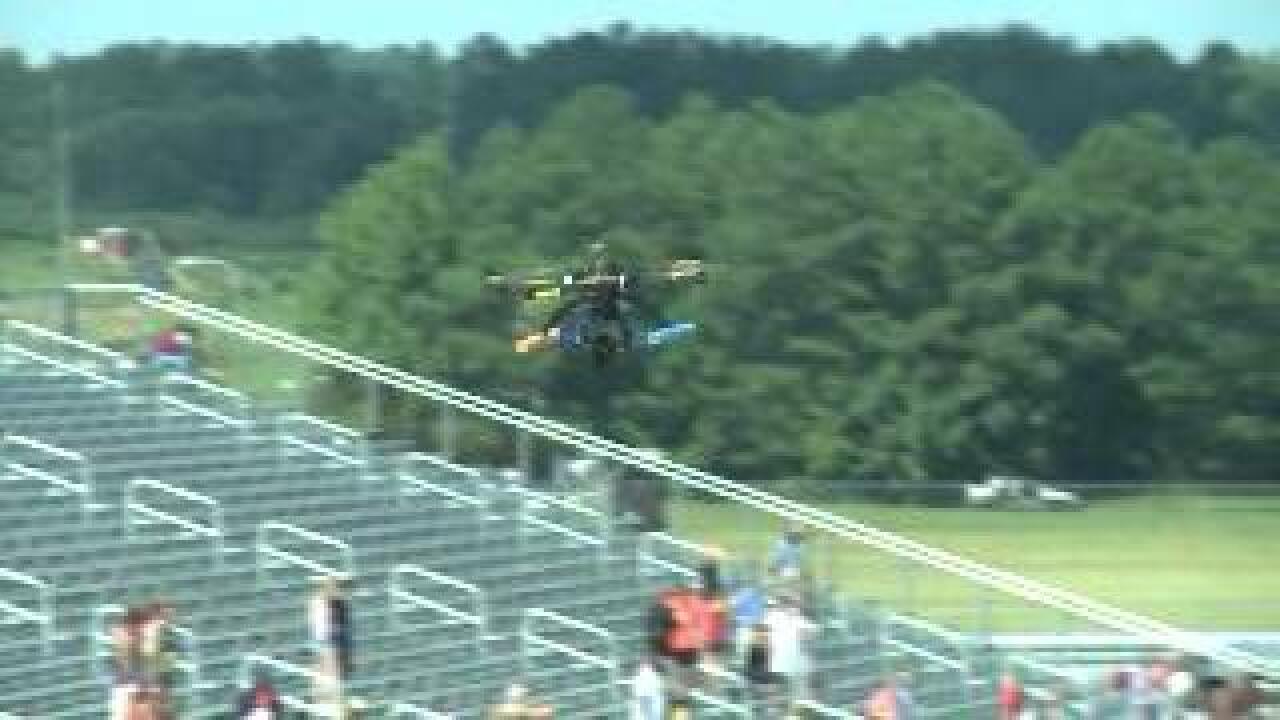 It happened at the Virginia Motorsports Park just before the 12 p.m. wave of the Great Bull Run kicked off.

The drone crashes :16 into the clip below:

The drone had been flying high above the track before it neared the stands. As the flying object dipped down, it steadied for a bit before taking a sharp left, speeding up and crashing into the stands.

There were a few injuries reported. Brad Fillius, his wife and several friends drove nearly two hours from the Norfolk area to take part in Saturday’s Great Bull Run in Dinwiddie.

The group ran in the 11 a.m. race without injury and then headed to the stands to watch later runs. They assumed they were out of harm’s way, because they were a safe distance from the running bulls. [CBS 6 EXCLUSIVE: Friends survive Bull Run, injured by falling aircraft]

Then a remote-controlled aircraft carrying a camera above them fell from the sky.

“It was a pretty significant blow and it knocked the wind out of me for sure,” Fillius, a naval commander stationed in Norfolk, said.

Fillius recalled the crowd being excited to see the remote-controlled aircraft taking video from above. A few minutes later, the device fell and hit Fillius in the chest.

While he got the most direct hit from the aircraft,  his two friends felt the side effects as the device hit them too.

“Because I saw it, I was able to put up my hands to protect my face, but my fingers felt numb at first because they were hit by the propellers,” Eileen Peskoff said. Peskoff fell backward off her bleacher seat as the device fell toward her.

“It basically turned itself in to a missile at that point and it wasn’t like it dropped, it made a b-line,” Patrick Lewis, the third to be injured, said.

The drone was not being operated by nor was it recording video for WTVR-TV as was reported initially by several outlets. [RELATED: CBS 6 EXCLUSIVE: FAA investigates Bull Run ‘drone crash’]

The FAA told CBS 6 that they were investigating the situation after becoming aware of our video.

"We are investigating to see if the person flying the unmanned aircraft violated any FAA regulations, particularly the part that says, "No person may operate an aircraft in a careless or reckless manner so as to endanger the life or property of another,"
said the FAA in a statement to CBS 6.

CBS 6 spoke by phone Monday night to Scott Hansen of Virginia Beach. Hansen claimed to own the remote-controlled aircraft involved in the incident.

Hansen, who directs and produces films, also leases specialized camera equipment, including his remote-controlled aircraft camera worth about $7,500.

Hansen said he leased the camera to someone involved with the Great Bull Run, but claimed he could not reveal the name of the operator without breaking a confidentiality agreement in their contract.

Hansen claimed he was not at Saturday’s event and has no immediate plans to repair the significant damage to his device. He added he planned to stop renting out his flying camera — for now.

Hansen said he feels badly about the accident and was relieved no one was seriously injured. He said he spoke with the group involved and offered to reimburse their costs for the event and for any medical visits.