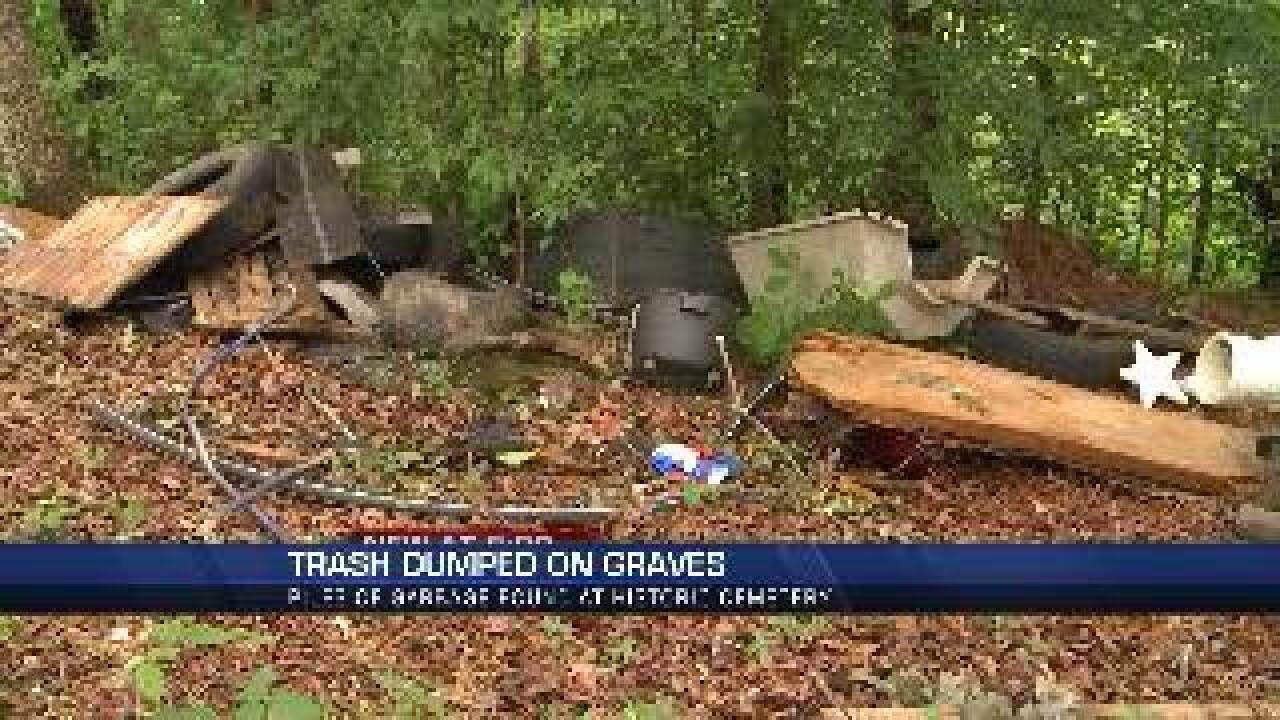 CHESTERFIELD, Va. (WTVR)--On most days at Matoaca Cemetery Kathy Powers, with her 10-year old “Baby” the beagle in tow, relishes her quiet strolls through the heavily wooded area that is nestled in a quiet neighborhood; but what she stumbled upon Tuesday shattered her sense of serenity.

A pile of trash dumped illegally on gravesites--from shingles and industrial vacuums to tires and toys--Kathy thinks the dumping happened Sunday night or early Monday.

"It is sickening,” Kathy says.  “If somebody could come in and do that they'd do anything as far as I'm concerned."

The dumped debris lies in a historic part of the cemetery where dozens of Chesterfield Civil War soldiers killed in battle now rest.

"Even now I am at a loss for words. I just cry. It just broke my heart,” says Kathy.

Kathy is so disgusted by the trash heap sitting in the cemetery she wants to put up her own money as a reward to catch the people or person responsible for dumping.

"I'm sure it is someone local they just didn't want to pay the seven dollars to go to the local dump,” says Kathy.

Police responded to Kathy's call, but with no hard evidence, tracking down the trashy criminal will be difficult. Caretaker Roy Joyner keeps the grass trim with his lawnmower at Matoaca, but bigger equipment will be needed to remove the junk.

"It makes me feel sick,” says Joyner. "It is disheartening. It breaks my heart that someone doesn't have any respect for people up here."

According to Chesterfield Police any person caught dumping illegally faces up to a year in jail and a $2,500  fine.

As for Kathy Powers and Baby, they'll settle for a 'Sorry' and a shovel.

"Throw the trash out but not on somebody's grave,” says Kathy. “Even if they're not caught just come and clean it up and apologize and be a human being."

Kathy and her family will be visiting Matoaca Cemetery this weekend cleaning up the mess and removing the trash.