STDs on the rise among cats 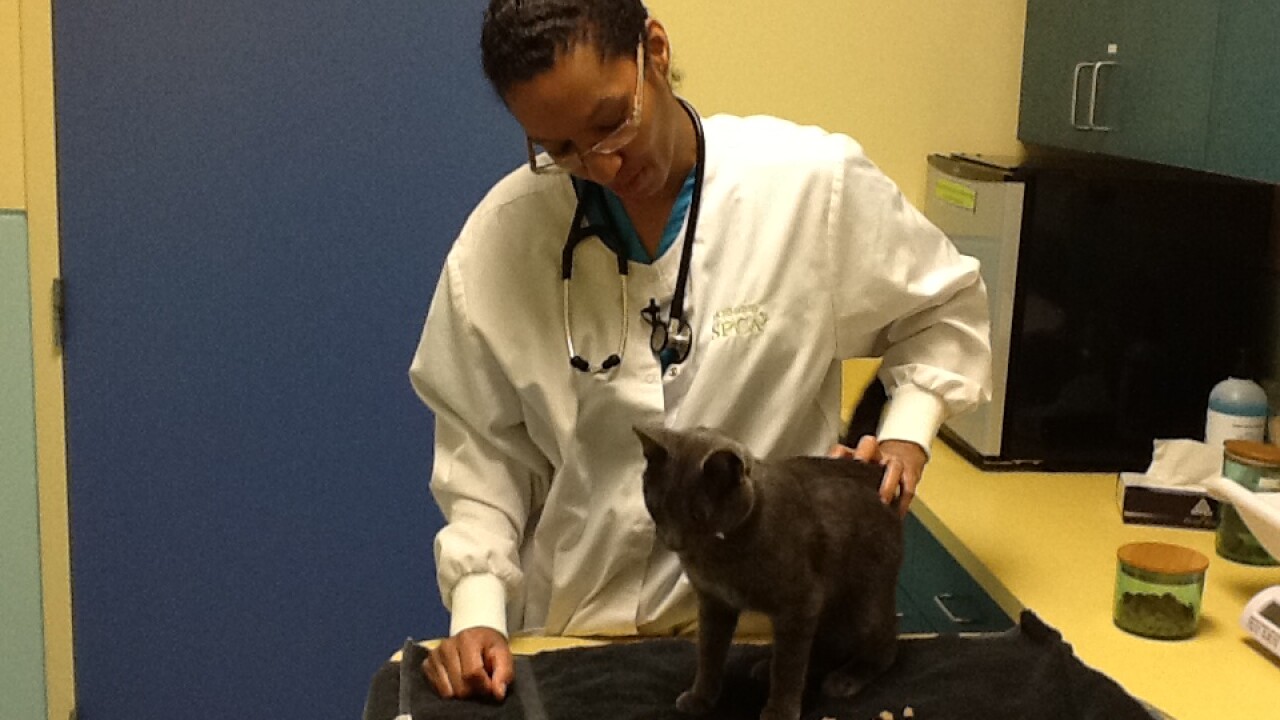 EDITOR’S NOTE: WTVR.com is partnering with the “iPadJournos” mobile and social media journalism project at VCU’s School of Mass Communications. Students from the project reported the following story.

By Lesli White and Scott Wyant (Special to WTVR.com)

Jessica Foley and her cat.

RICHMOND, Va — When dropping off your cat at a veterinary clinic, you probably wouldn’t expect it to come home with a sexually transmitted disease. But that’s exactly what happened to the cat of VCU student Jessica Foley.

A few weeks after the doctor’s visit, Foley noticed something wasn’t quite right with her cat Sunny.

At the time, she didn’t know her cat had contracted feline herpes, a virus similar to genital herpes in humans.

According to the American Society for the Prevention of Cruelty to Animals, it is one of the leading causes of upper respiratory infections in cats. And among STDs, feline herpes is one of the more aggressive viruses, estimated to infect more than 90 percent of cats.

Symptoms can include sneezing attacks, eye ulcers, loss of appetite and depression.

“It was affecting his immune system and his respiratory system, so he was not able to process food the way he should. It was causing all sorts of problems,” said Foley. “We had to immediately put him on antibiotics. It was not good.”

Later, she learned a number of cats at that clinic were infected with feline herpes and Feline Immunodeficiency Virus, which weakens the cat’s immune system and is commonly referred to as cat AIDS.

The infected cats were were not sectioned off completely from the other cats, which left Foley’s cat vulnerable to the virus.

“You should be careful about your cat roaming around in kennels when you’re not aware of their health and safety hazards as far as keeping quarantine rooms, not actually boarding cats into those areas,” said Foley. “Having to deal with it is a long process. It’s strenuous on the cat and it’s strenuous on the owner.”

To avoid spreading diseases, the Richmond SPCA for instance houses infected cats separately from other cats. For example, the clinic tests cats for FIV when they come into its care and holds FIV positive cats for 60 to 90 days before it makes them available for adoption.

“They’re not allowed to interact with the other cats, because we don’t want them to put themselves in a position where they have to defend themselves and bite and that’s how the disease is transmitted,” said Richmond SPCA veterinarian Dr. Rosalie Gibson.

“We tell the owner they should be in a one-cat household, because it’s generally transmitted through bites through other cats,” she said. It can also be transmitted through sexual contact and birth. But it cannot be spread to humans, which is a common misconception, Gibson said.

Some estimates show that FIV could affect close to 12 million cats in the U.S. with rates rising significantly in cats that are sick or at high risk of infection. Many estimates don’t account for the stray cat population left undiagnosed. Symptoms of FIV include enlarged lymph nodes, fever, anemia, poor appetite, dental disease, wounds that won’t heal and skin redness or hair loss.

Just like HIV and herpes in humans, once infected there is no cure for cats and if left untreated can lead to life-threatening conditions. However, it doesn’t mean these cats can’t live normal, healthy lives.

“That just [means] taking more care of him, paying way more attention to him and basically catering to his every need,” Foley said.

While the news of her cat’s diagnosis was alarming and her cat requires more medical attention, she never once thought about giving her cat up for adoption just because he was sick.

“Sunny was a rescue cat,” Foley said. “It took me two years to get him to the point where I could even wrap him around my neck, walk around with him in my arms or just throw him up in the air.”

“I have so much care and love invested in that cat,” she added. “I would never give him up just because of his condition.”