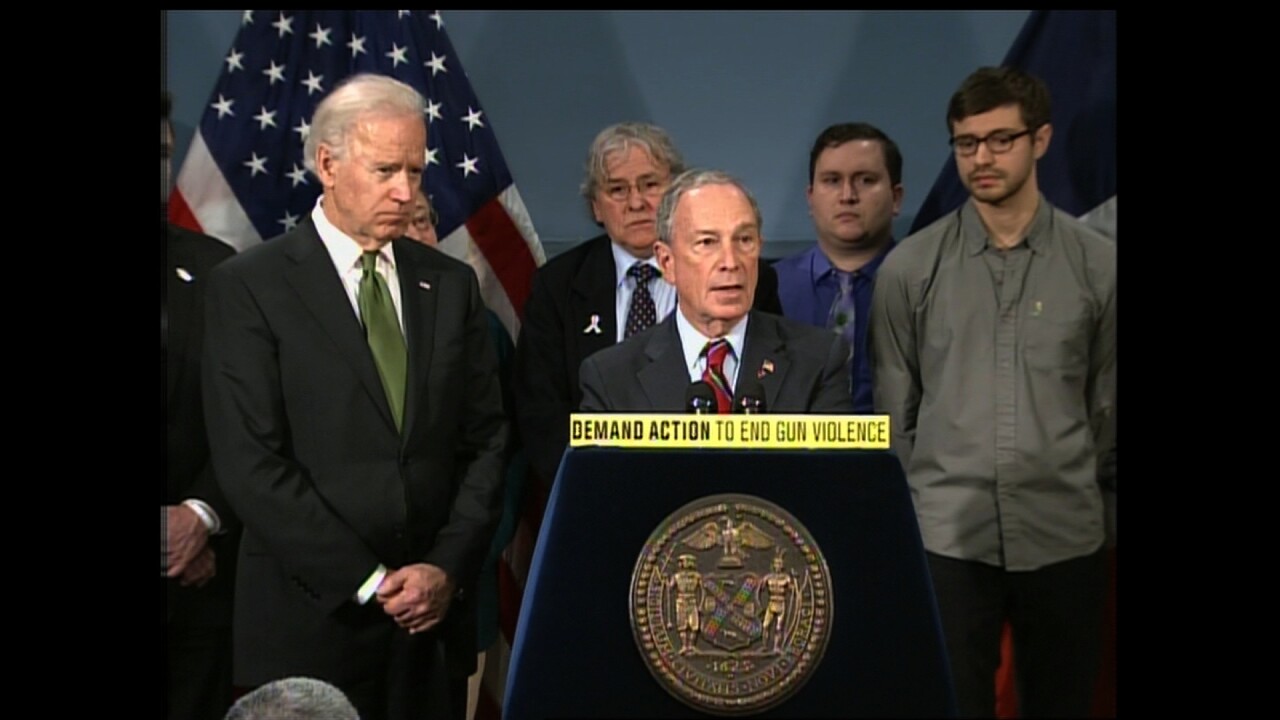 Vice President Joe Biden and NYC Mayor Michael Bloomberg touted what they term the “importance of passing common sense legislation to reduce gun violence,” including the need for a stiff background check system for all gun sales. March 21, 2013

(CNN) — The drive for a tough federal gun control law has hit a political roadblock. But that’s not silencing Joe Biden and Mike Bloomberg.

The loquacious vice president and the outspoken New York mayor on Thursday touted the “importance of passing common sense legislation to reduce gun violence,” including the need for a stiff background check system for all gun sales.

They joined families of those killed last December in the shooting massacre in Newtown, Connecticut, to push for new rules. They spoke at New York City Hall as prospects for a ban on semi-automatic weapons styled after military assault weapons appeared to founder.

Bloomberg cited public opinion polls showing wide support for background checks, saying “there’s no real debate” among Americans about this issue. He said nationwide background checks on all gun sales would save lives, and that the only question “is if Congress has the courage to do the right thing.”

“We remain optimistic that Congress will take action this spring,” he said.

“There is no question that if this becomes law, it will keep guns out of the hands of people who should not have them. It will reduce violent crime. It will save lives. We know that’s true, because in states that already require background checks on private sales, the rate of women murdered by an intimate partner armed with a gun is 38% lower than in states that don’t have such background checks.”

The ban proposal, categorically opposed by the National Rifle Association, would get fewer than 40 votes, Senate Majority Leader Harry Reid said Tuesday, far below the threshold needed to defeat a filibuster or pass the Senate. Instead, the ban could be offered as an amendment to the gun legislation on the Senate floor in order to get a vote on it, Reid said.

Biden, who lauded Bloomberg’s “immense” and “committed” gun control work, criticized those who say the proposals would violate rights.

“Tell me how it violates anyone’s constitutional rights to limit (ammunition clips) to 10 rounds,” Biden said. “Think about Newtown. … Think about how many children and teachers may be alive today had (the shooter) had to reload (more often than) he did.”

He worked to raise the spirits of people discouraged by the power of the gun lobby.

“I was told in 1992, when I introduced many of these reforms, that there was no way, you never beat the gun lobby, it’s not possible. Well, in 1994, we did. In 1994, reason prevailed, and we passed the assault weapons ban, a limitation on the size of magazines, and a number of other measures, including expanding the so-called Brady Bill and background checks.”

Many reforms have since expired. But, he said, “One thing I want to lay to rest at the outset: They worked. They all had a positive impact on public safety.”

Biden said that the Sandy Hook Elementary School shooting in Newtown was conducted with “a weapon of war, and that weapon of war has no place on American streets.” The shooter, Adam Lanza, gunned down 20 children and six adult staff members with a Bushmaster AR-15 rifle.

“Taking it off American streets has no impact on one’s constitutional right to own a weapon,” Biden said. He also noted that conservative Supreme Court Justice Antonin Scalia “acknowledged that government has a right to limit certain weapons from being able to be possessed by American citizens.”

He expressed his admiration for the Newtown families and said their presence has helped move legislation through the Senate Judiciary Committee and gives such gun control reform a “fighting chance.”

“It takes an enormous amount of courage to be here,” Biden said to the families. “And you say, well, what’s the courage? Having lost a child, I understand that every time you show up at something that ranges from a memorial service, or to talk about the circumstances in which your child was lost, it comes back to you in a flash, as if they got that phone call yesterday. And I told you before, I don’t know how you do it, but you do it. You do it.”

(Biden’s first wife and the couple’s 1-year-old daughter were killed in a car accident in 1972.)

Biden argued against those who say assault weapons and high-capacity magazines can’t be banned.

He said gun-trafficking legislation will give police power “to be able to deal more rationally with straw sales, those sales where people go in, buy multiple guns, and then sell them to the bad guys.” He said the more police are on the streets, the better.

The proposed reforms, Biden said, “will not solve every problem. It will not end every gun death. But it will substantially reduce it. And it matters.”