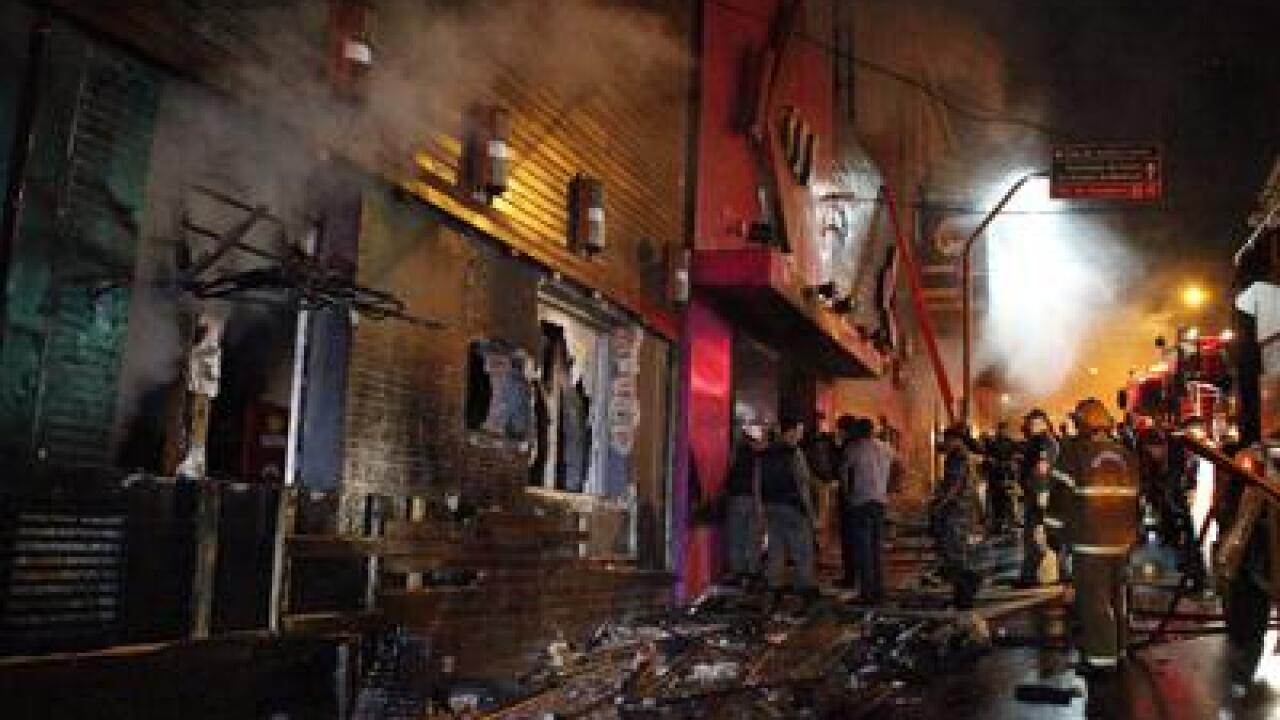 Hundreds didn’t escape in time from the Kiss nightclub in Santa Maria.

The blaze killed at least 245 people, many of whom apparently died from smoke inhalation, police said. Others were trampled in the rush for the exits, one security guard told CNN affiliate Band News. Investigators said dozens were injured.

About 2,000 people were inside the club when the fire broke out — double the maximum capacity of 1,000, said Guido de Melo, a state fire official.

“This overcrowding made it difficult for people to leave, and according to the information we have, the security guards kept people from leaving the building,” he said.

The fire started “from out of nowhere” on a stage at the club and quickly spread to the ceiling, witness Jairo Vieira told Band News.

Smoke billowed outside the front of the building as the stench of fire filled the air, said Max Muller, who was riding by on his motorbike when he saw the blaze.

Muller recorded video of a chaotic scene outside the club, which showed emergency crews tending to victims and dazed clubgoers standing in the street. Bodies lay on the ground beside ambulances.

Friends who were inside the club told him that many struggled to find the exits in the dark. Muller, who was not inside the club Sunday morning but has been there twice before, said there were no exit signs over the doors. It is rare to see such signs in Brazilian clubs.

Valderci Oliveira, a state lawmaker, told Band News that he saw piles of bodies in the club’s bathroom when he arrived at the scene hours after the blaze. It looked “like a war zone,” he said.

Police told Band News that 90% of the victims were found in that part of the club.

Video from the scene showed firefighters shooting streams of water at the club and shirtless men trying to break down a wall with axes.

Hours later, families and friends searching for information were outside a nearby sporting complex, where bodies were taken for identification, the state-run Agencia Brasil reported.

Brazilian President Dilma Rousseff became teary-eyed as she spoke of the tragedy to reporters in Chile, where she has been attending a regional summit.

“The Brazilian people are the ones who need me today,” she said. “I want to tell the people of Santa Maria in this time of sadness that we are all together.”

Police were interviewing witnesses as part of an investigation into what caused the blaze, state-run Agencia Brasil reported.

The fire started at about 2 a.m. after the acoustic insulation in the Kiss nightclub caught fire, said Col. Adilomar Silva, the regional coordinator of civil defense.

There was a pyrotechnics show going on inside the club when the fire started. Authorities stopped short of blaming it for the blaze, saying the cause was still under investigation.

“There just weren’t enough emergency exits,” Mateus Vargas, a witness who was inside the club when the fire broke out, told Band News.

The incident called to mind a 2003 nightclub fire in Rhode Island where pyrotechnics used by the heavy metal band Great White ignited a blaze that killed more than 90 people.

Pyrotechnics were also involved in a 2004 nightclub fire in Argentina that killed 194 people and a 2009 explosion at a nightclub in Russia that left more than 100 dead.

The Kiss nightclub is popular with young people in Santa Maria, drawing between 2,000 and 3,000 people a night on the weekends.

The blaze broke out during a weekend when students were celebrating the end of summer. Students at many Brazilian universities return to school on Monday.

Santa Maria is home to the Federal University of Santa Maria as well as a number of other private universities and colleges.