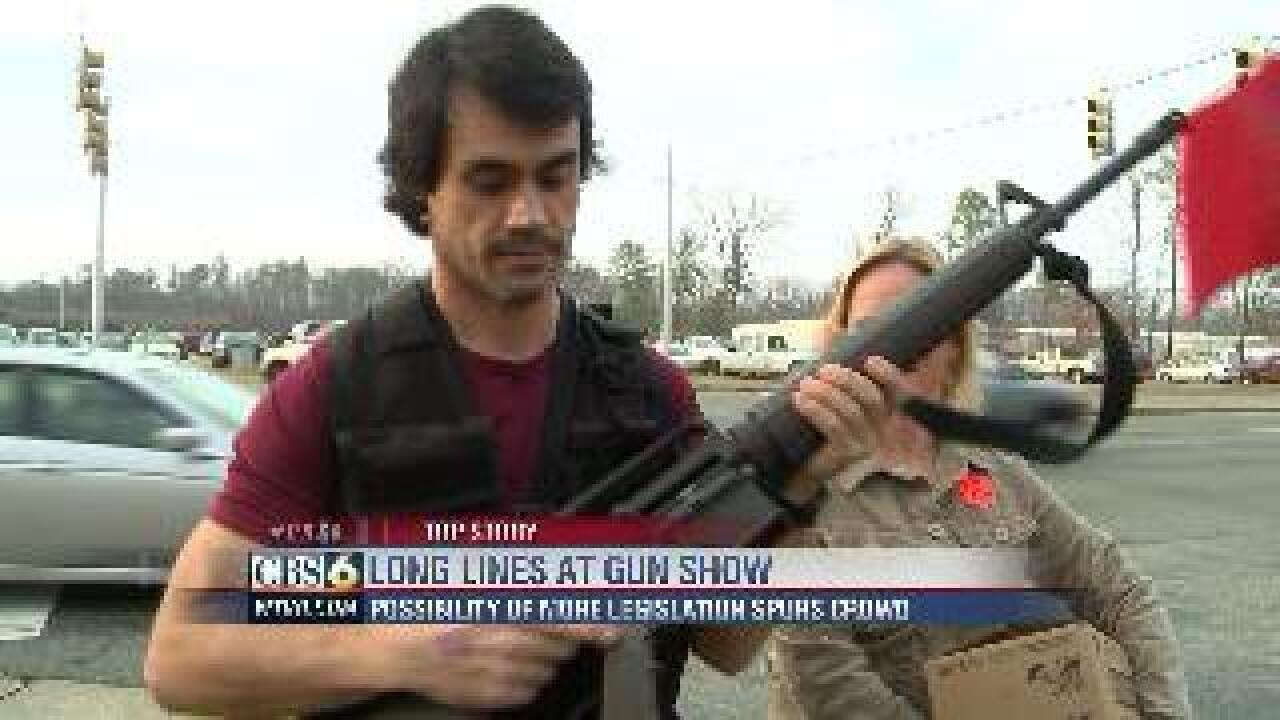 HENRICO COUNTY, Va. (WTVR) - With the national discussion on strengthening gun control laws as a backdrop, close to a thousand people came the Showplace on Mechanicsville Turnpike Saturday. It was the first day of the C&E Gun Show.

Lines stretched for hundreds of yards throughout the parking lot comprised of gun enthusiasts wanting to browse the latest technology or stock up on ammunition.

Show organizers say the size of the crowd was not completely unexpected. The show has been coming to Richmond for more than 20 years, and one show manager says Saturday’s crowd was pretty much typical.

“This is just a perfect example and sign that when the government starts trying to legislate new gun laws it’s going to create panic,” says Mark Lilly, who owns a small market across the street from the Showplace.

Police officers shut down the left turn lane heading into the grounds because traffic was so dense early in the day. People showed up prior to 7:00 a.m. for the show, despite the fact that it did not open for another two hours.

Since the shootings at Sandy Hook Elementary in Connecticut, politicians nationally and locally have taken up the charge to stiffen gun control laws.

Vice President Joe Biden has been meeting with groups on many sides of the issue this past week. State politicians have begun debating gun control laws during the first few days of the 2013 session of the Virginia General Assembly.

“I think people are just more aware and coming out to get things they might not be able to get in the future,” says Dawn Odom, a gun owner who came to the gun show chiefly to purchase primers, which are used to reload bullets that have been fired already as a way of saving money.

Odom is a recreational shooter, and she says the crowd at the show did not surprise her.

Virginia State Delegate Joe Morrissey (D - Henrico), has been a longtime proponent of closing Virginia’s “Gun Show Loophole.” In Virginia, not everyone who buys a weapon at a gun show must go through a background check like they would if they purchased a firearm a licensed store.

Morrissey has also introduced a bill this session that would ban private ownership of high capacity magazines for assault rifles. Morrissey believes this goes hand and hand with the “Gun Show Loophole.”

“If you have these magazines and we outlaw them, but you can buy them willy-nilly at a gun show, it becomes silly,” says Morrissey.

Steven Waddell from Norfolk considered selling his AR-10, a semi-automatic rifle, at Saturday’s Gun Show in Richmond. Even though that venture was unsuccessful, Waddell says he is glad he has place to exercise his right to do so.

“The Second Amendment is what gives all other rights teeth,” says Waddell.