Google’s maps app back on the iPhone 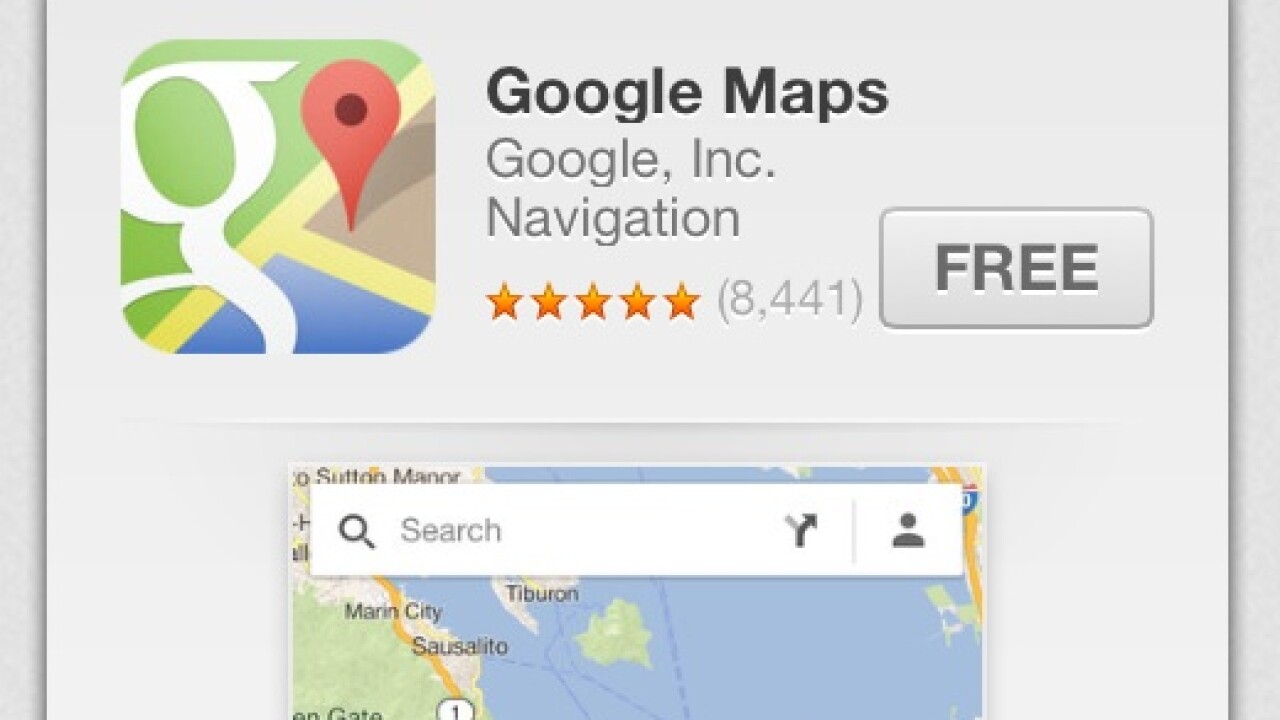 NEW YORK (CNNMoney) – Google’s maps app is once again on the iPhone.

After a five year relationship, Apple had ditched Google’s mapping data in favor of its own in September. The results were less than spectacular.

Three months, an apology from Apple’s CEO and an ousted high-ranking executive later, Google Maps made a triumphant return Wednesday night, and it is now available for download on the iTunes App Store.

The app features turn-by-turn navigation, live traffic information, and public transportation directions — all of which were missing or problematic on Apple’s new maps app. Google took the opportunity to call attention to its superior mapping data.

“At the heart of this app is our constantly improving map of the world that includes detailed information for more than 80 million businesses and points of interest,” said Daniel Graf, director of Google Maps for mobile in a company blog post. “If you see something off, simply shake your phone to send us feedback.”

Google’s new app is actually the first maps application that the search giant has made for the iPhone. The company had previously provided the backend data for the iPhone app, but Apple had designed and controlled the actual software, which was preloaded onto its devices.

By making its own app, Google is no longer collecting licensing fees from Apple, but it has the opportunity to make money by displaying advertisements in the software. Similarly, Google had provided the content for Apple’s YouTube app for the past five years — but when Apple canceled that arrangement, Google released its own advertising-supported YouTube app in September.

Google’s release of its maps app will come as a relief to many iPhone owners who had missed the older, much more thorough, application. Apple’s new maps app is powered by significantly less data than its predecessor. In the latest version of the iPhone’s software, iOS 6, Google’s enormous database of geographical points has been replaced by Yelp’s far less substantial list, as well as Apple’s own compiled “places of interest” database.

All that means spelling mistakes or less-popular locations tend to trip up the app. Apple’s maps app also lacked transportation directions, which were available in Google’s app — a must-have for city-dwellers.

Giant goofs in Apple’s data have also been found, including some comically off-target location data for landmarks, roads that lead nowhere and woefully bad directions. Though the app’s performance has slowly improved over the past several months, the high-profile snafus have continued.

This week, police in Mildura, Australia warned drivers that using Apple Maps could be “potentially life-threatening,” because the app places Mildura 40 miles away from its actual location. Apple’s maps app seems to think the city of 30,000 is located in a nearby national park, which has no water supply and where temperatures can reach 114 degrees. Police have rescued several motorists from the park.

Facing a PR nightmare, Apple CEO Tim Cook issued a letter of apology two weeks after the app was released, saying the the company “fell short” of its commitment to provide its customers with a “world-class” product. In the meantime, the CEO recommended that customers use alternatives to Apple’s app, including Google Maps on the mobile Web.