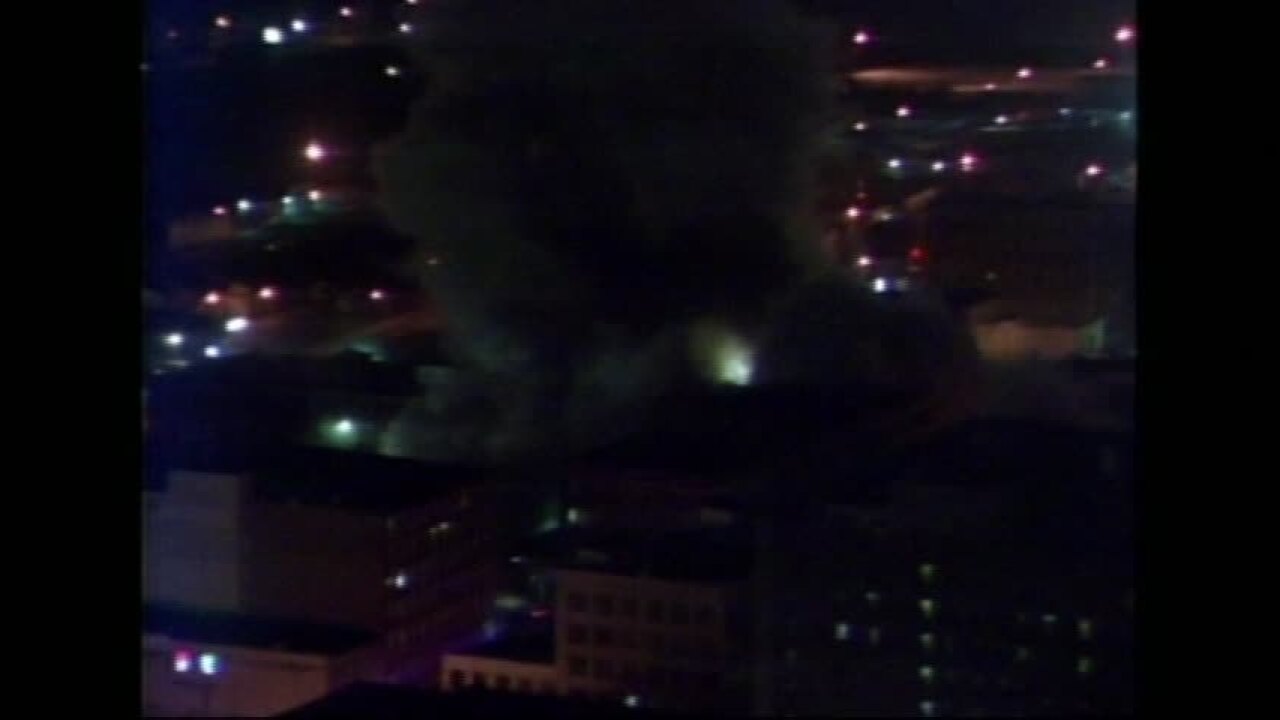 (CNN) - Eighteen people were injured early Friday evening when a gas-fueled explosion ripped through a strip club in the western Massachusetts city of Springfield, the city's mayor said.

Those in the club and nearby buildings had evacuated by the time the blast occurred at 5:25 p.m., Mayor Dominic Sarno said.

Nine of those injured were Springfield firefighters, four were gas company employees, two were police officers, two were civilians, and one was a municipal water and sewer department employee, the mayor said. Earlier, a police sergeant said more civilians were hurt and all were transported to Baystate Medical Center or Mercy Medical Center.

"Through God's mercy, we are not aware of any fatalities," Sarno said.

People as far away as South Hadley, 10 miles north, felt the blast.

Video showed that the facade of one building was shredded by the blast, while glass from blown-out windows littered streets blocks away.

Besides the leveled multistory structure that housed Club Scores -- which Sarno referred to as "ground zero" -- 12 buildings suffered significant damage, and at least a dozen others had collateral damage, Springfield fire Commissioner Joseph Conant said.

Columbia Gas spokeswoman Sheila Doiron told reporters Friday that a call about a strong gas odor came in at around 4:20 p.m.

The gas company's employees were on site in about 25 minutes, and they shut off the gas to the building soon thereafter, according to Conant. The explosion came 15 minutes later.

Overhead video from CNN affiliate WWLP showed what appeared to be police lights flashing near an otherwise calm scene until a huge burst of fire soared into the sky. That was followed by thick plumes of black smoke.

Within hours, Conant said firefighters were able to bring "the fire situation ... under control."

The officials who spoke at Friday night's news conference said they had no knowledge that any of the injuries suffered in the blast and its aftermath are life-threatening.

None of the eight patients brought into Baystate Medical Center are in critical condition, said hospital spokeswoman Jane Albert. She said hospital officials have been told they no more injured are coming.

Authorities are working to determine what caused the fire, with state authorities assisting local first responders -- including members of the city's arson and bomb unit -- at the scene. Doiron, from Columbia Gas company, said "there have been no measurable readings of natural gas at this point" that might indicate more widespread leaks.

A shelter has been set up at nearby Central High School for anyone displaced by the explosion and evacuations in the vicinity, said Sarno.