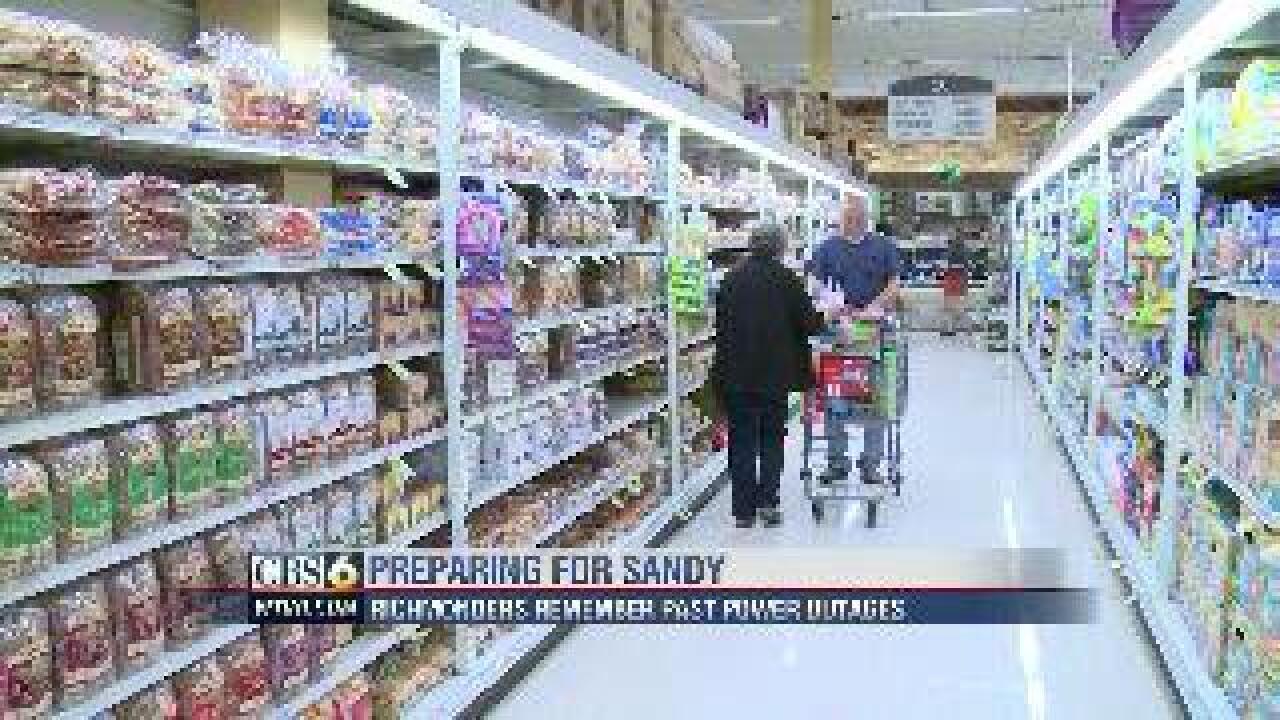 RICHMOND, Va. (WTVR) - Folks across Central Virginia, the Northern Neck and much of the East Coast started stocking up at the grocery store as forecasters warned of the looming "Frankenstorm."

"It is a little surprising. I didn't think it would come that close to the coast," Connie Davidson told CBS 6 News' Sandra Jones.

Davidson was getting a jump on Hurricane Sandy and stocking up on basics, including water and batteries.

She's was just one of numerous customers Friday at Pleasants Hardware.

"I got an oil lamp, got a portable castle iron. I got a portable heater," Carl Shiles said. "It's going to be getting cool next week -- and if we lose power, I have a 92-year-old mother-in-law.”

Across town at the Carytown Martin's, Bill McCallister was shopping early to beat the evening rush and has his routine down pact.

"During the storm, we figure we'll have gas. So, we're going to get a lot of things that we can to just pop in the oven and be done with it,” he said.

But the impact of Hurricane Sandy may not be so easy for Dominion Virginia Power.

"We've already requested help from neighboring utilities, and utilities from quite some distance away. In anticipation of some major outages resulting from the storm,”  Dominion Virginia Power spokesman Karl Neddenien said.

Neddenien said crews will be working 24-hour shifts, but urges residents to prepare as well.

"Please make sure you have some drinking water available, make sure that if you have prescription medicine, keep that refilled, keep it available. If you're running a generator, make sure you keep it outdoors,” said Neddenien.

Speaking of outdoors, the City of Richmond is keeping its crews on standby ready to tackle city neighborhoods, but wants residents to start gearing up now.

"We want them to rake up the leaves from their yards and bag those leaves, because that will minimize local flooding in their neighborhood if they can do that at this time,” Richmond Department of Emergency Management's Anthony McLean said.

Additionally, city officials said residents should have an emergency plan and kit that will last for three days.

They also said volunteers will be in city neighborhoods to help seniors and the disabled if the power goes out.