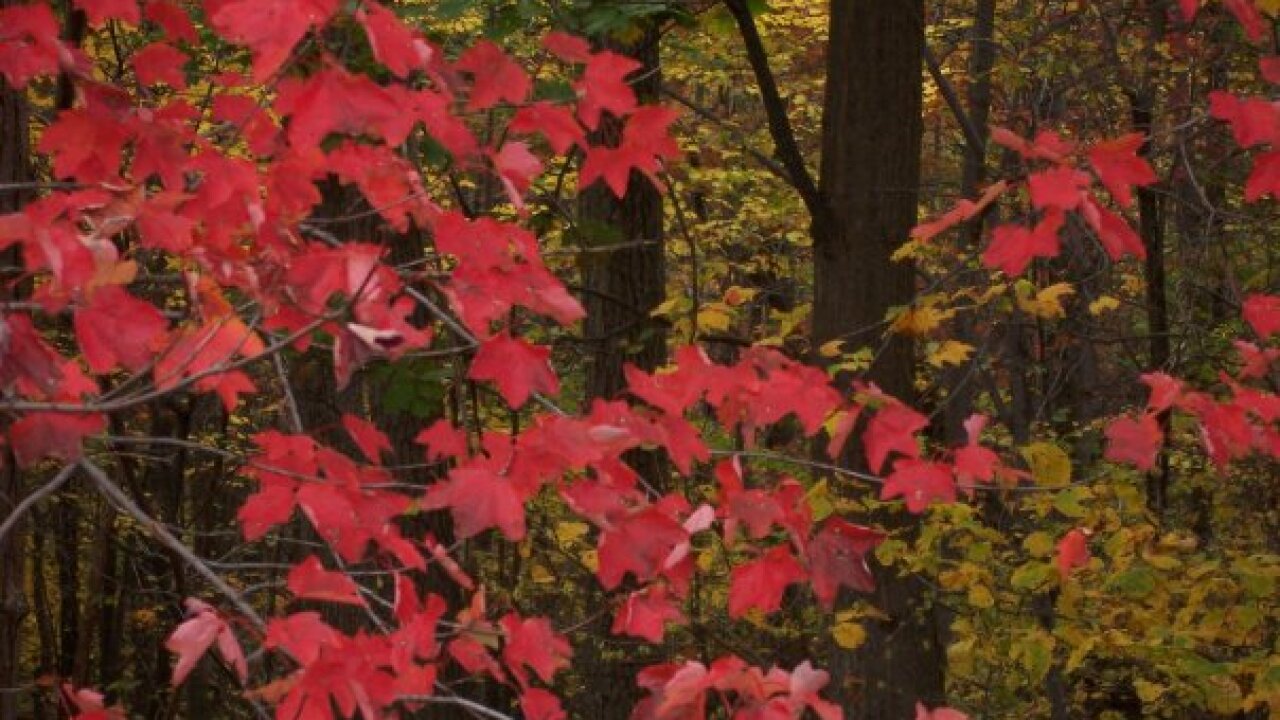 Rzonca reports, “Some of the higher elevations in northern West Virginia and northwestern Virginia have crossed into the low color range (11% – 30% change).  Be aware that these areas are very limited.  However, in the coming week, I would expect to see more areas reporting low color.”

As this is still extremely early in our Fall foliage season, Rzonca notes that leaf drop remains very low. This is just the beginning of the show!

So what kind of Fall colors spectacle can we expect this year? That depends on a number of factors, from storms that can damage trees (we’ve had plenty of those this year), to rainfall (necessary for healthy trees), to temperatures, to the type of tree.

Leaves change color, or rather, reveal all of their colors already present in the leaves, during the Fall season as a result of  shorter days and a lower sun angle. Chlorophyll (the green color we usually see on leaves in Spring and Summer) is produced in leaves as energy from the Sun is absorbed into the tree during Spring and Summer. Trees also need water (Summer rains in the mountains have been fine in Virginia) to work with the Sun’s energy to then produce the sugars the feed the tree. But Chlorophyll isn’t the only piece of the color puzzle. There are three components of a plant leaf that create the variety of colors we see during Fall as Summer fades to Winter.

Chlorophyll is the dominant green color during Spring and Summer. Carotenoids also present in leaves produce yellow, orange, and brown colors.  Anthocyanins is the final factor, and they add the richest, darkest, red to violet colors to leaves. They also are responsible for the red in some apples, blueberries, cherries, strawberries, and plums.

All three pigment pieces are present in the leaf through Summer, it’s just that the chlorophyll is the “dominantor,” making leaves look green. As chlorophyll production dwindles, the other colors show.

The Virginia Department of Forestry explains, “Both chlorophyll and carotenoids are present in the chloroplasts of leaf cells throughout the growing season. During this time, chlorophyll is produced and broken down and leaves appear green. As days get shorter, chlorophyll production slows down until it stops. The green color is no longer visible, and other pigments present (carotenoids) with the chlorophyll are then revealed. During autumn, bright light and excess plant sugars produce anthocyanins within leaf cells.”

Daylight time is, therefore, the main reason why leaves change color. That doesn’t change year-to-year. However, the weather can play a significant role, affecting the brilliance and longevity of the Fall foliage season. If trees have been damaged by storms or distressed by drought, the colors will likely not be as bold, nor linger as long. If a strong storm system sweeps through with gusty winds during the leaf change, then leaves will drop early.

Drought has been a serious issue in central Virginia through the Summer months, so this may lessen our Fall foliage show in this region of the Commonwealth. However, the mountains of western Virginia, where the best foliage show exists anyway, looks like it should be pretty good as a result of respectable rounds of rain there. For example, look at the year-to-date departure from normal rainfall map for our region, showing near-normal or above-normal rainfall for much of western and southwest Virginia.

But drier-than-normal conditions continue in the western Piedmont, northern Virginia, and central Virginia. I wouldn’t expect our best Fall foliage color show in these regions this year.

CLICK HERE to learn more about why leaves change color.