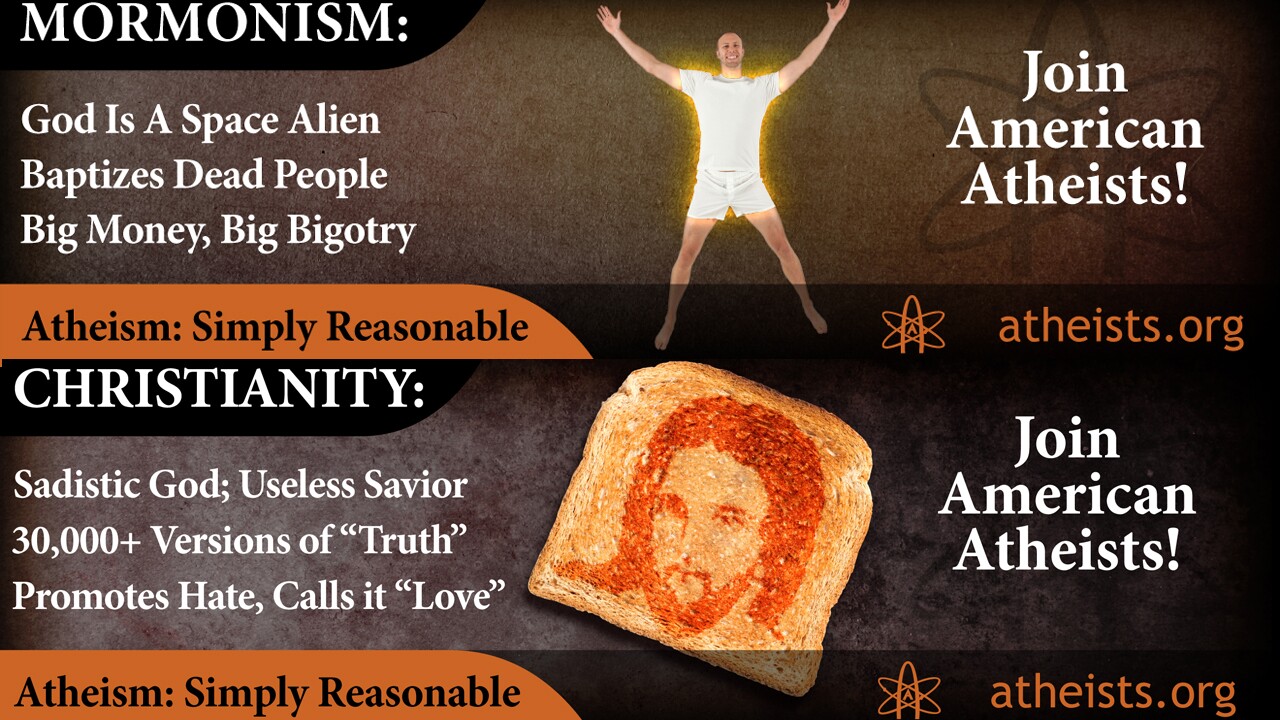 American Atheists planned to use the Democratic National Convention to take aim at the presidential candidates’ religion, putting up billboards targeting Mormonism and Christianity in Charlotte, North Carolina.

American Atheists planned to use the Democratic National Convention to take aim at the presidential candidates’ religion, putting up billboards targeting Mormonism and Christianity in Charlotte, North Carolina.

By Dan Gilgoff and Dan Merica

(CNN) — An atheist group that raised a pair of billboards taking aim at the presidential candidates’ religion at the site of next month’s Democratic National Convention has pulled the signs after what the group called a “large volume of threats.”

The billboards, sponsored by American Atheists, took aim at Mormonism and Christianity and went up this month in Charlotte, North Carolina, which will play host to the Democratic convention.

Presumptive Republican nominee Mitt Romney is a Mormon, and President Barack Obama is also a Christian.

The billboard targeting Christianity featured an image of Jesus Christ on toast and this description of the faith: “Sadistic God; Useless Savior, 30,000+ Versions of ‘Truth,’ Promotes Hates, Calls it ‘Love.’ “

The Mormon billboard featured a man in white underwear, a reference to special Mormon garments.

American Atheists said the billboards provoked a “large volume of threats” by phone and e-mail and that the group reported the threats to police.

“It is with regret that we tell our members and all of those who treasure free speech and the separation of religion and government that American Atheists and Adams Outdoor Advertising have mutually agreed to remove the billboards immediately,” Amanda Knief, American Atheists’ managing director, said in a statement last week.

“No subject, no idea should be above scrutiny — and this includes religion in all forms,” Knief said. “We are saddened that by choosing to express our rights as atheists through questioning the religious beliefs of the men who want to be our president that our fellow citizens have responded with vitriol, threats and hate speech against our staff, volunteers and Adams Outdoor Advertising.”

American Atheists had wanted to put the anti-Mormon billboard in Tampa, Florida, to coincide with this week’s Republican National Convention.

When no billboard company in the city would lease the group space for such a sign, American Atheists President David Silverman said the organization decided to focus solely on the Democrats in Charlotte.