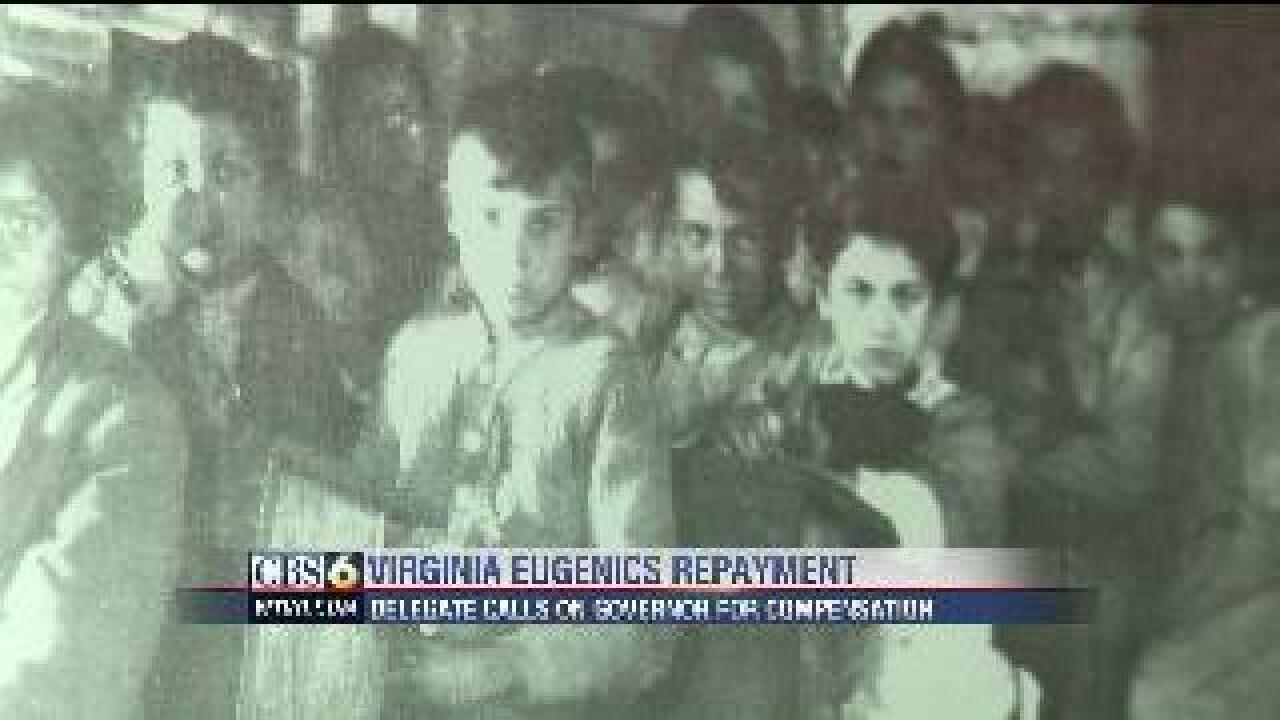 RICHMOND, VA (WTVR) - A Virginia delegate announced a call to action at the General Assembly this afternoon, demanding the Commonwealth pay reparations to the victims of the state's forcible sterilization program--and there's significance to the timing of the announcement. This year marks the 85th anniversary of the Supreme Court ruling legalizing eugenics.

Delegate Patrick Hope, (D) Alexandria, made the announcement this afternoon in the House briefing room. According to Hope's office, 7,500 Virginians were forcibly sterilized by the state during the 53 years eugenics was practiced in the state.

Virginia's eugenics law was upheld by the 1924 Supreme Court Decision Buck v. Bell. The law wasn't overturned until 1977. It became a model for laws adopted in other states, and mandated involuntary surgical sterilization for any hereditary illness or disability. At the time, this included mental illness, alcoholism, developmental disabilities, even 'immorality.'

Ten years ago then Governor Mark Warner issued a formal apology for the practice, but today Del. Hope is expected to ask Governor Bob McDonnell and the General Assembly to provide a "symbolic payment" to eugenics victims.

“It’s now time to write the final chapter in this shameful and repugnant part of Virginia’s history," Hope said. "What we’re asking for goes well-beyond just simple words of regret. We need to set an example and take full responsibility for our actions so that the healing process can finally begin.”

Hope was joined in his announcement by the Christian Law Institute.

“It is both emblematic and responsible for Virginia to take the lead again on the issue of eugenics sterilization, but this time in becoming the first state to provide relief to the victims. It is appropriate for Virginia to set this example,”  said Mark Bold, executive director of the Lynchburg-based organization.

“We call on Gov. Bob McDonnell and the Virginia General Assembly to provide a symbolic payment to the living victims of sterilization. Compensating these individuals is the just and right thing to do. However time is quickly running out.”

While Hope did not suggest a specific monetary figure, the reparations could be pretty costly to the state.

[BONUS: Watch Mark Holmberg's report on the role a Richmond doctor played in the eugenics movement]

North Carolina's house approved a bill in June that would have provided $50,000 to each  surviving eugenics victim. The state estimates their program forcibly sterilized roughly 7,600 North Carolina citizens.

While researching the bill, its supporters were able to verify 146 living victims, but some estimate the actual number of eugenics survivors could be closer to 1,800.If those figures are accurate, the measure would have cost the state upwards of $90 million.

The legislation ultimately failed to pass in North Carolina's senate.