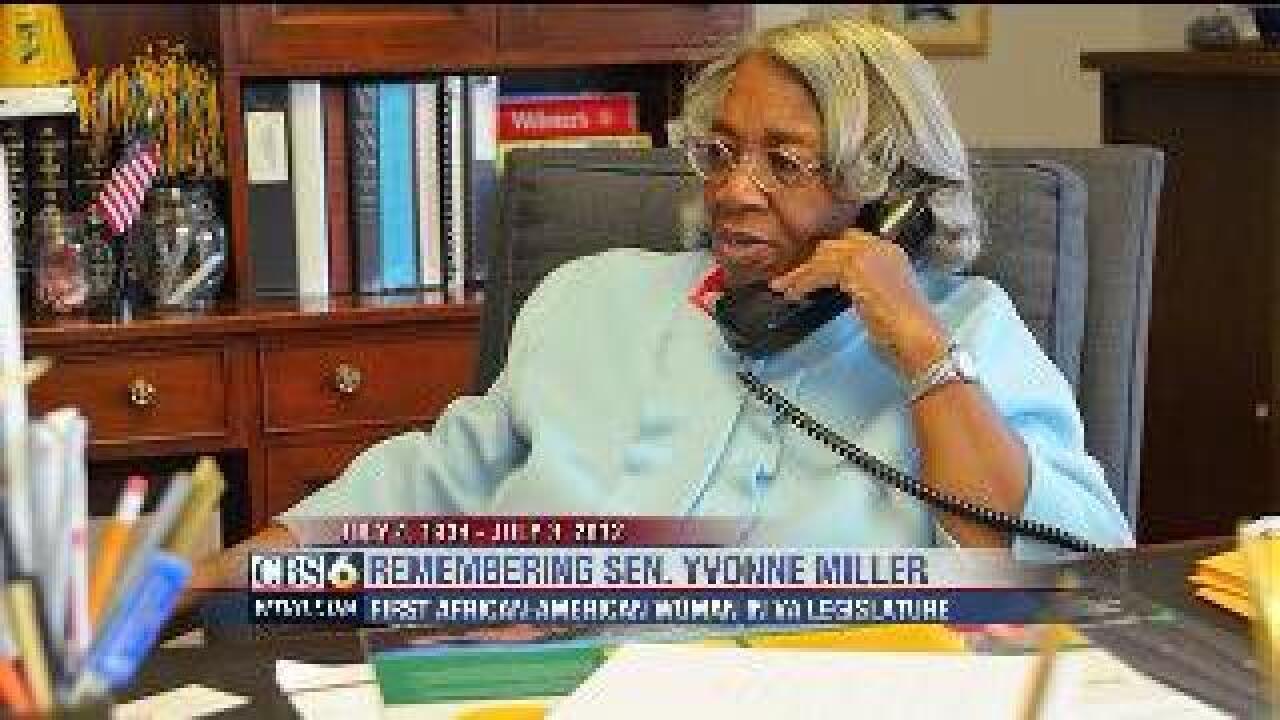 RICHMOND, Va. (WTVR)--During her political career that spanned 28 years in the Virginia General Assembly and blazed a path of several ‘firsts’ along the way, State Senator Yvonne Miller left quite a mark on her colleagues, constituents and the institution she so faithfully served.

“She was anchored in the struggle to help poor people, to help children and the elderly,” said State Senator Henry Marsh, who sat alongside Miller in the Senate for 20 years.

“We’re going to miss her not only for her policy,” said Marsh, “but for her warm and friendly smile, and her cheerful disposition.”

The first African-American woman to serve in both Virginia’s House and Senate, Miller died on Tuesday after a battle with cancer.

Marsh described his former colleague as a champion of public education, a voice of the underprivileged and a much more popular representative than he.

“Her office was flooded with people, almost every single day,” chuckled Marsh. “And I was embarrassed that I had so few people coming in, and I’m right here in Richmond and she had all those people coming in from Norfolk.”

Listening to the concerns of voters, according to friend and fellow legislator Jennifer McClellan, was perhaps Senator Miller’s greatest strength.

“Anyone who was vulnerable or in trouble, she would defend like a lioness,” said McClellan.

At press conferences, hearings or even on the floor of the Senate, Miller would “come out swinging” for those in need, continued McClellan.

As a black woman with a clear leadership position in the House, McClellan told CBS 6 she partly owes the opportunities she’s received to the bravery of her predecessors, like Miller.

“Just coming in the door to what was still a good old boys’ club and being the only black female face was tough,” said McClellan. “I think there was sexism at the time that she felt from both sides. But she didn’t care, she knew she had a job to do and she knew she was going to do it. And she earned the respect of everybody in that building.”

In Miller’s honor, the state flags are currently being flown at half-staff. There’s a black cloth covering her seat on the Senate floor, and a memorial banner emblazoned on the Senate’s digital screen.

“Somebody will succeed her,” said Senator Marsh at the end of our interview. “But no one will take her place. She has a special place that she carved out, in all those years of service.”

Miller died on July 3, one day before her birthday.

Funeral services will be held Tuesday morning in Norfolk.