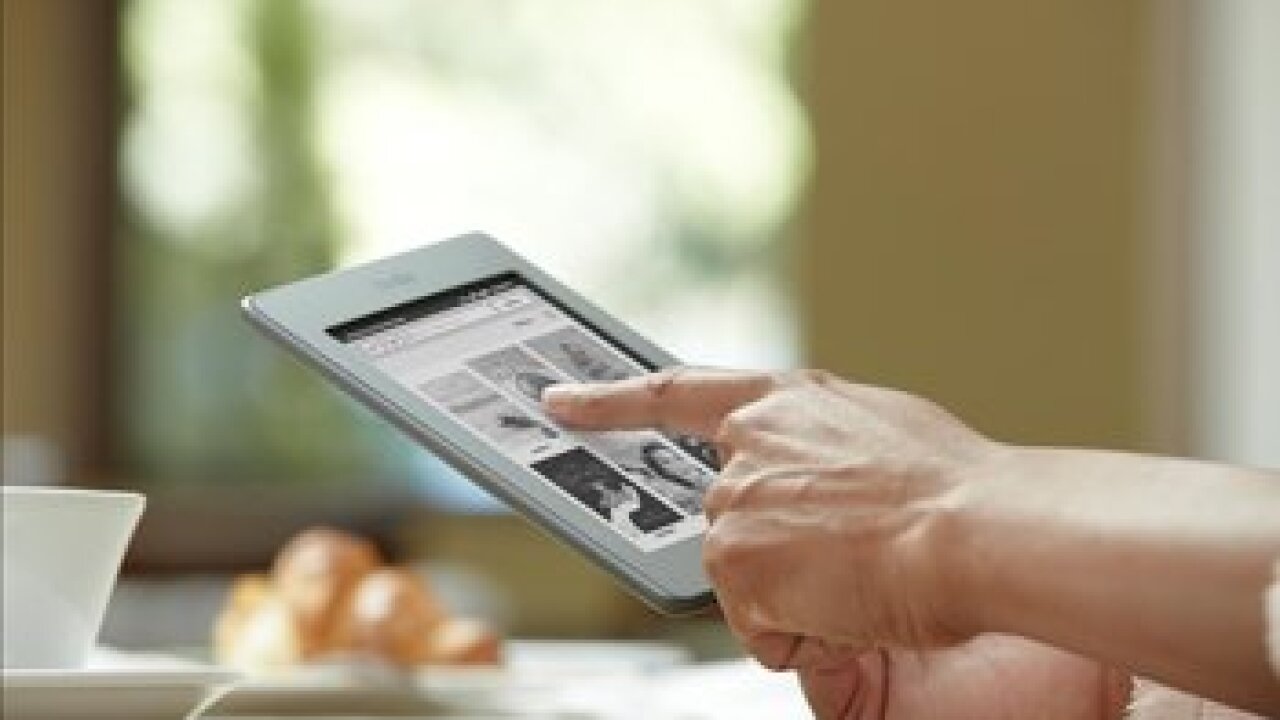 Amazon’s Kindle Touch, introduced Wednesday, September 28, 2011, is the first Amazon e-reader with a touch screen. It uses infrared sensors to avoid screen glare and costs $189 for a 3G cellular connectivity.

(CNN) – Last year, Gideons International distributed more than 84 million printed copies of the Bible around the world to students, hospitals, members of the military and, of course, hotels, where they are a ubiquitous sight in bedside tables.

Starting this month, however, the InterContinental Hotels Group is modernizing that mission at one of its hotels, replacing the paper tomes with electronic versions of the Bible loaded on Kindle e-readers. Each of the 148 rooms at the chain’s Hotel Indigo in Newcastle, England, will be outfitted with a Kindle Touch with Wi-Fi. Guests can use the e-ink devices to catch up on scripture, as well as purchase and read any other books available in the Amazon Kindle store.

The hotel was chosen for the pilot program because of its rich literary and publishing history: It’s a few blocks from the Philosophical Society of Newcastle, one of the largest independent libraries in the UK. If it’s a success, InterContinental could expand it to other locations, and other hotels might follow its lead.

The hotel’s Bible-on-a-Kindle initiative has no connection to Gideons, a Tennessee-based Evangelical group and association of Christian professional men founded in 1899. However, the nonprofit group has no reservations about the hotel’s program.

“Anything to put the Bible in people’s hands is a good thing,” Gideons spokesman Ken Stephens said. “It is a fascinating idea, and I’m sure somehow, some way, its time will come for us. But right now just the paper version is the best for what we do.”

Stephens pointed out that paper books are more economical for large-scale distribution. Each Gideons Bible costs the organization about $5 to print and distribute. Although there are many free e-book versions of the Bible floating around online, a 6-inch Kindle Touch e-reader retails for $139.

Given the high price tag, Hotel Indigo is keeping close tabs on the devices. Just like with fluffy hotel robes, the full cost of any pilfered Kindle will be charged to a guest’s credit card. For the first two weeks of the program, the hotel is allowing guests to download any other religious texts they like, up to $8 in value, for free.

If guests purchase other books to read, the cost will be charged directly to their rooms. However, they can’t take the books with them, and the Kindles are wiped clean between visitors.

“As downloads will be synced to the hotel’s account, guests will only be able to read the downloaded book during their stay,” an InterContinental representative said.

Guests not keen on paying for an e-book they might have to abandon halfway through can choose from the 15,000 free titles in Amazon’s free e-book collection.

The Gideons’ hotel Bible project began in the U.S. in 1908 and has spread to 194 countries around the world. The group estimates it has distributed 1.7 billion Bibles in the project’s 104-year history. While distributing pricey e-reading devices isn’t much of a threat to Gideons, it’s likely that the proliferation of e-reading features on all mobile devices could make a dent in demand.