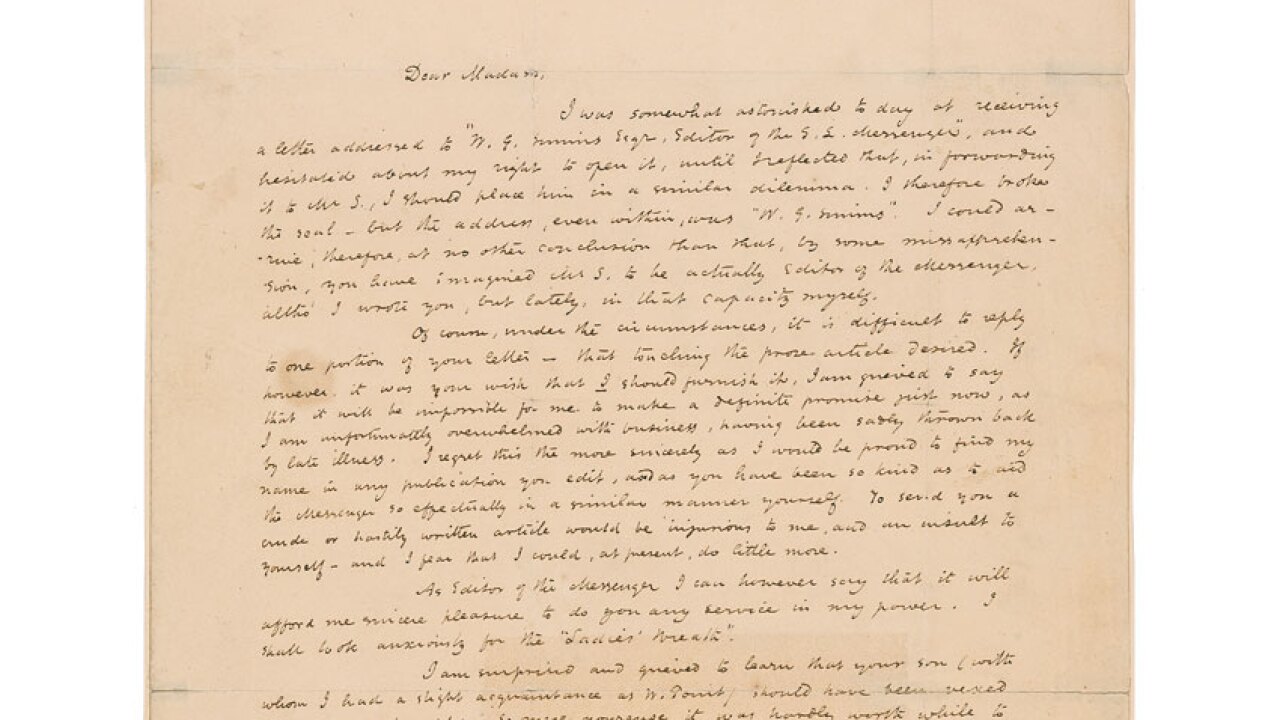 AMHERST, NH (WTVR) – A rare letter written by one of Richmond’s most famous residents fetched a big price at auction last night. A one-page letter from Edgar Allen Poe to noted writer Sarah Josepha Hale was sold for more the $164,00 dollars at a New Hampshire auction house RR Auction.

In the letter, Poe was responding to a request Hale had sent to the editor of the Southern Literary Messenger. Hale had mis-addressed her letter, not knowing Poe had recently been instated as editor of the literary publication. He had been fired for a short period time after being found drunk on the job.

Poe, who was living in Richmond at the time, was writing to Hale in Boston. The opening portion of the letter reads:

“I was somewhat astonished to day at receiving a letter addressed to ‘W. G. Simms Esqr, Editor of the S. L. Messenger,’ and hesitated about my right to open it, until I reflected that, in forwarding it to Mr S., I should place him in a similar dilemma. I therefore broke the seal — but the address, even within, was ‘W. G. Simms.’ I could arrive, therefore, at no other conclusion than that, by some miss apprehension, you have imagined Mr S. to be actually Editor of the Messenger, altho’ I wrote you, but lately, in that capacity myself.”

Hale was a famous writer in her own right, being the author of the famous nursery rhyme “Mary Had A Little Lamb.” At the time the letter was written she was the editor of another well-known literary publication, Godey’s Lady’s Book. She had written asking if Poe would submit a prose article for publication.

“Of course, under the circumstances, it is difficult to reply to one portion of your letter — that touching the prose article desired. If however, it was your wish that I should furnish it, I am grieved to say that it will be impossible for me to make a definite promise just now, as I am unfortunately overwhelmed with business, having been sadly thrown back by late illness. I regret this the more sincerely as I would be proud to find my name in any publication you edit, and as you have been so kind as to aid the Messenger so effectually in a similar manner yourself. To send you a crude or hastily written article would be injurious to me, and an insult to yourself — and I fear that I could, at present, do little more.”

Poe goes on to tell Hale that he had met her son David Hale, Hr. in the early 1830’s when they both attended West Point. Poe never finished his education at the military academy. He was kicked out after purposefully getting court martial-ed for disobedience and neglect of duty.

The letter is considered very rare, as it’s unusual to find correspondence of this kind between two so well-known literary figures.

“A literary gem, this choice letter to another leading literary figure of the period, is exceptional both in its unusual length and content,” Bobby Livingston, Vice President of RR Auction, said in a release.

The Southern Literary Messenger was published out of Richmond, Va from 1834 until 1864. Poe was hired as an assistant editor in 1835, and was fired only a few weeks later. He was re-hired after promising to behave, and was quickly promoted to editor. He remained with the Messenger until 1837.