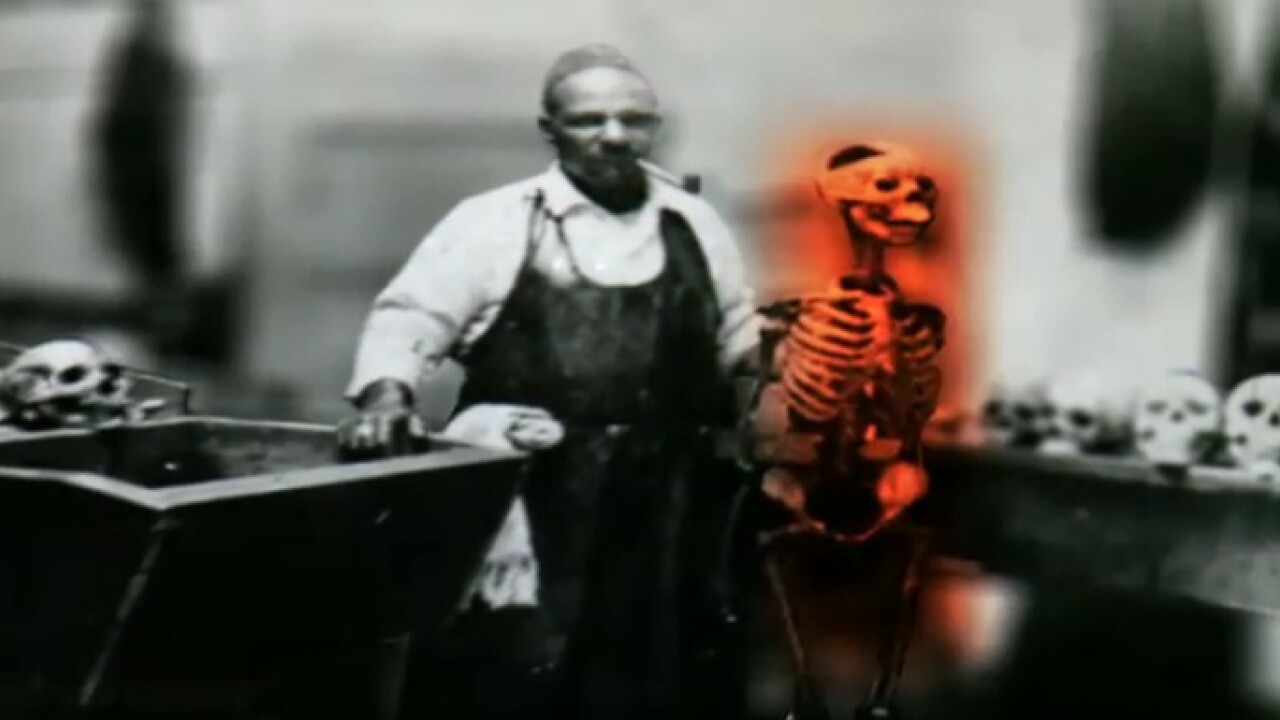 RICHMOND, Va. (WTVR) - You would have to dig deep to get to the bottom of the Chris Baker story. He signed his name with an "x" but he taught doctors how to save lives.

He was hated in the black community, but was respected by the white elite, including Virginia state governor William Cameron, who pardoned Baker after he was caught robbing graves. He was totally comfortable prowling cemeteries, but ran and hid at the first hint of lightning.

It was said Baker could wield black magic. As one future doctor wrote of the legendary keeper of the bones, "he was a small man, bald, and wore a black skull cap that made him so distinguishable that Negroes avoided him like the plague."

But Chris Baker was one of the key figures in the early years of what became the Medical College of Virginia. This janitor-turned-anatomist served the college from the late 1860s until a few years before his death in 1919.

He was likely born in the basement of the Egyptian building, where it is believed his father worked as a janitor. The Egyptian Building, which still stands today at 12th and E. Broad Streets, was one of the first buildings erected by the college. It's strange aspect would only add to the sense of foreboding about what was going on inside.

Baker would spend nearly his entire life in the building, in the midst of the bones from the graves that he robbed. His Richmond News Leader obituary says he died there, "in his home in the old college building."

It was said that anatomy is the foundation of medicine, and dissection has long been the way to learn anatomy. After the Civil War, medical science marched forward dramatically as dissection became more common.

That meant there were men like Chris Baker at many of the nation's medical schools; men who could bring in fresh bodies, cheap - about $5.00 - and not many questions asked. Grave robbers. Body-lifters. Resurrectionists.

"MCV actually began as the medical department of Hampden-Sydney College and it began here in Richmond because there was an abundance of clinical material," said Jodi Koste, archivist at the Tompkins-McCaw library at Virginia Commonwealth University. "And that meant there were people without families, there were free blacks, there were people working for hire in the city and you'd have ready access to patients and also ready access to cadavers."

But Ole Chris, as he was called, also became a master of anatomy.

Dr. R.B. Ware, class of 1895, said because Ol' Chris was "living with bones all of his life, he knew as much about anatomy as any professor." And the self-taught, taciturn anatomist also had a keen eye for the living humans who came to him for skulls and information.

"It was said that he could usually tell which medical students were going to make it through anatomy," said Koste.

Before electricity the dissections occurred under a skylight on the fourth floor of the Egyptian building. As was customary, budding doctors posed with the body that taught them about life. Chris Baker was often invited into those photographs.

Those photos show a small man, standing eerily in the background, or off the side. A man apart.

As Dr. Albert Pilkington, class of 1900 said, "there was no more loyal member of the college, than Chris Baker." The college needed new bodies for every new group of four or five students. "Medical schools did require fresh subjects," Koste said. But the crude methods of embalming meant a ferocious odor, particularly in the basement where Chris Baker lived and worked, dissolving flesh and tissue off the bones in his vat of quicklime.

Dr. John F. Woodward, class of 1900, wrote of that during in a remembrance of Ol' Chris. The future doctor had ventured to the basement to buy a skull for class. "I was met by the most peculiar nauseating odor I have ever known, My desire to be a doctor was certainly at a low ebb."

He ebbed even lower when he met Baker amidst that odor and the sound of splashing liquid. He was "dressed in a black, close-fitting, greasy jacket and black greasy pants, the whole outfit redolent of the sickening odor . . . "I inquired about the splashing of water. 'Jes stirring 'em up a little.' About that time I felt something stirring up in me, handed him five dollars and departed in a hurry with the skull wrapped in newspapers under my arm."

There are many sensational stories surrounding the legendary Baker. One indicated he attended funerals as a mourner to scout for fresh subjects. Many Richmonders believed he carried a rubber bag to silence the screams of the living he captured in dark alleys.

Many a mother and nanny reportedly scared children into submission by evoking his name.

"Chris Baker would get you," Koste said. "Either after the grave or, in some cases, they felt like he went out at night and deliberately killed people to obtain bodies." But it's likely he only forayed out occasionally because of he was so hated and feared.

Records indicate he had helpers who brought him bodies to the side door of the building.

He was a very busy man, keeping the whole place shipshape. He was also known to keep an eye out for professors while medical students played dice in the lab. "In addition to assisting all the students and kind of supervising the lab," Koste said. "He was responsible then to the demonstrator and the professor of anatomy and meeting their needs."

Chris Baker was known to haunt Sycamore cemetery in Northside and Oakwood cemetery in northeast Richmond. In Decemeber of 1882, he was caught red-handed at Oakwood Cemetery with his assistant, Caesar Roane, and two white medical students, W.B. Meredith and William A. Smith, according to news reports at the time.

Apparently, a third student, a fleet-footed resident of Louisa County, dashed away from the trap set by a police officer with the appropriate nickname of "Angel."

The State newspaper editorialized in favor of the body-lifters for their role in advancing medicine.

The Virginia State newspaper argued in a front page analysis that Chris Baker and other medical resurrectionists are not a "necessary evil." The article continued: "Besides, if they be, why not divide the honors between Oakwood (Cemetery) and Hollywood alike, and between he two races? It has been claimed by many white men that Negroes are physically dissimilar to Caucasians. If that be true, then it is not fair to the white people that only colored ones should be dissected and should be the only ones of whose physical structures the doctors have any knowledge." (Of course, we've known for generations we're all pretty much identical inside.)

Governor Cameron pardoned Baker and the General Assembly soon passed a law that allowed the bodies of criminals and the destitute to go to medical colleges. Even though Chris Baker spent 50-years among diseased bodies, formaldehyde and harsh elements like mercury, he lived until June 8, 1919.

He was believed to be about 70-years-old. He was buried at Evergreen Cemetery in the far East End. Reportedly, numerous doctors planned to attend. Many of the older sections of that cemetery are completely overgrown. And early burial records are no longer available.

CBS-6 spent several hours searching the older sections, but could find no hint of Baker's burial site. It's unclear if he has any living descendants. Records indicate he had a wife, Martha (apparently a laundress), and a son, John.

Some believed his family lived with him in the Egyptian building, but Koste said that's unlikely. City directories in the early 1900s show Chris Baker had a series of residences near the hospital in Jackson Ward where his family likely lived.

Anyone who has any further information about his family can call Mark Holmberg at (804) 254-3684 or email him at mholmberg@wtvr.com.

A VCU professor is working on a documentary about this small, quiet man with a giant legend.